Who knew....
one simple, 3-4 foot piece of yarn could equal a morning literally loaded with learning?

Call it a squiggle, throw the mystery word, "imagine" in the mix and WAH LAH!, learning in it's purest form.

Plop (plop!) n:  a book, song, word or object that has the ability to inspire imagination, play and curiosity.  It acts as a catalyst to spark all sorts of fantastic learning opportunities.


A child's imagination is different then that of an adults.  A child's is on standby or ready alert at all times, ready to imagine at a moment's notice.  Adults, on the other hand, sometimes have to wake up their imagination from a deep sleep and give it a chance to freshen up before it is able to deliver.
﻿﻿
Test your imagination with the following pictures.  See how yours stands up to the imagination of a child!!  You will find the "answer" at the end of the blog.  Keep in mind, this is your imagination...so there are no wrong answers....simply different answers.  See if you can think like a child!


As play usually works, one thing led to another.  When Avery discovered she could use her squiggle for fishing, it was as if a brand new world was invented! Suddenly the previously, unspoken boundary of making something on the floor with your squiggle no longer existed.  Suddenly, the squiggle could be something that you could hold in your hand.

In an instant, Avery's moment of fishing transformed the environment into a room full of tying and pulling.  There was problem solving, trial and error and teamwork going on everywhere you looked.  The squiggle had become a tool, a means to move something.


Across the room, Ethan is also learning through trial and error, persistance and problem solving.  I was amazed at his dedication to pulling the pirate ship.  He wanted to succeed so very badly.
Try after try, with each try involving lots of small motor work and eye hand coordination.

Finally, he was successful and the pirate ship set sail across the wide open ocean! 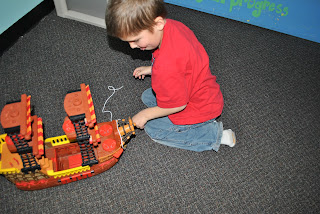 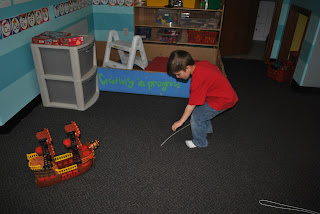 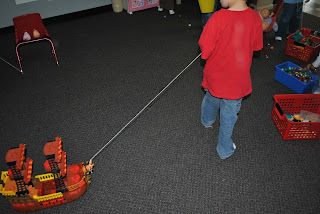 When a child found success, they were quick to share their method with others.  Look at Alaynas method above.  Prior to this discovery, everyone was wrapping buckets with the squiggle in order to pull them around holding onto one piece of the squiggle.  Alayna's idea triggered even more problem solving!﻿﻿ 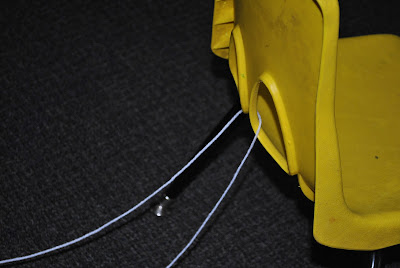 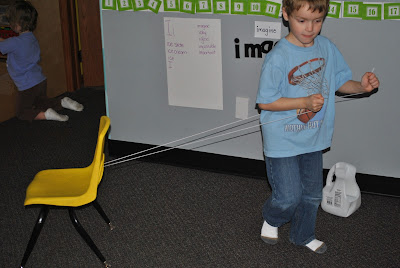 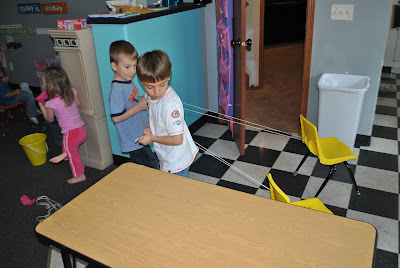 In the photo below, we see Jack.  Jack has never been a follower.  He prefers to play his own way, and that play always ends up with a grand discovery.  Notice the squiggle in the container?  He discovered if he dropped his arm very swiftly, the squiggle would come flying out!  Children are natural scientists.  He repeated the flying squiggle over, and over, and over again.  Each time with the same amount of success.  He also tried fancier moves with his arms to see if it affected the flight pattern of the squiggle.  I was mesmerized watching his process of learning. 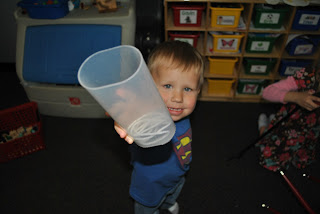 If one squiggle is fascinating to watch take flight...imagine two!  Working together, Jack and Molly test drive two squiggles. 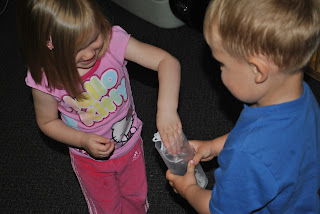 So then.  How does your imagination compare with that of a child?

Also -- if you don't have this book...no worries!!  The book does NOT make the activity!  While it's nice to have a book to go along with an activity, it's not always necessary!  Don't let the fact that you do not have "The Squiggle" keep you from plopping squiggles! 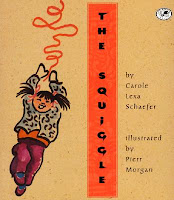 Yesterday, as I was packing for a speaking engagment this weekend, my crew saw me grabbing one of our newer favorite books, Balloons Balloons Balloons by Dee Lillegard.  I found this gem last year at Barnes and Noble in the "bargain books bin" for $5.95.  Just recently I introduced it to the children, and it has become an instant favorite.

As I was packing it, I decided to check on it's availability.  I hate to share books that people can't get any longer, and since I found it in the "bargain" section, chances were pretty good that it might not be in print anymore.

Anyway, I posted this moment on my "Play Counts" Facebook page and one of the responses was "I'd love to see your list of top 20 books"  And thus.....this blog post was born!

So then...without any further a duex......I present you with the

Each of these selections are uniquely loaded with their own treasures.  Listen to the children in your program.  Books that are favorites at my program may only get a so-so review at yours.  The love of a book has a lot to do with the reader.  It's not only the story, but also how the book  is presented, read, interpreted and what the interests of the audience are.  Read aloud for the enjoyment of a story....yes, there are math skills, literacy skills and social/emotional skills that can be addressed in all of these books... but the main reason we read to children is to instill a love of reading in them.  Allow the children to get lost in the book and let their imaginations run wild!

And there you have it!  The top 20 "read it agains" according to some brilliant young minds!!

I could write a blog post about the learning potential of each of these books, but for now -- share these with your children, then follow their imaginations and ideas!  Children LOVE to bring books alive!!  I'll work on further blog posts --- you, just go enjoy!!

Just as Ragu proudly exclaims "It's In There".  Play can make the same declaration.

Trial and error?  Cause and effect?  Problem Solving?  Imagination?

When you give play a chance, when you sit back and really take a close look at play, you simply cannot argue with the statment:  IT'S IN THERE.

Just in the last 45 minutes, this is what was found in play at my program:

1)  The MYSTERY WORD ("hunt") was written on an index card and hung on the wall
2)  The letters, h,u,n,t were hidden
3)  Plastic Easter eggs were taken apart and hidden seperately from their other half...some up in the buckets held to the ceiling by our PULLEY SYSTEM, some in plain site
4)  Various bunnies found at the $1 section of Target were hidden (bendy bunnies, hopping bunnies similiar to Ants in the Pants, and wind up bunnies)

Meanwhile....across the room, Jack and Erik are busy counting the Easter eggs as they load up an egg carton.

Posted by Denita Dinger at 8:18 AM