STOP the Adult Brain Instead of Stopping Child-led Play

Just as children get urges, we adults get urges too.  Sometimes those urges are very strong.  The most common urge we get is to interrupt what a child is engaged in for the simple reason that it goes against what our adult brain has "planned" for them to do.

We tend to struggle with the urge to STOP THEIR PLAY, when really, we need to STOP OUR BRAINS and take a moment to reflect on the learning that is occurring right in front of us, NOT because of us.

I experienced this very urge this week in my play school program.  I KNOW very well that there is value in child-led play.  I KNOW that play is the best way for a young child to learn.  Even with KNOWING those things are true, my adult-brain still struggles to not lead sometimes.

Here's the order of events that sparked this blog post (yes, pull up a chair..this might get lengthy...or, save this post for THAT trip to the bathroom -- you know the one, where you flush many times so your family thinks you are really "busy" in there, but really, you just want some quiet time and are actually sitting on the floor all cozied up with your "must read" items....if you have never done this, you are welcome for the idea, it works like a charm.)

And so the story begins:
Thanks to itty bitty pieces of torn up wrapping paper and the parachute, my crew led me to the mystery word, "fly" at the end of our time together on Wednesday.  SO...I followed their lead as I prepared the environment for our time together on Thursday.

I "plopped" the following in the environment:
1)  the catapult and bucket with soft items perfect for flying
2)  a small parachute was placed beside the bucket of wrapping paper pieces begging to fly
3)  the pendulum had a bathroom puff tied to the end of it...perfect for flying through the air
4) the mystery word: "fly"

The children arrived on Thursday morning, and, as expected, dove right in to the catapult......what wasn't expected is they played with it for ten minutes and that's it.

One child discovered the mini (6 man) parachute and wrapping paper....they played with that for long enough to scatter wrapping paper ALLLL over the floor.

The pendulum was a hit...again, for about ten minutes, then got the occasional attention from the passing-by child.

They found the letters "l" and "y" and figured out that our mystery word was fly.

That was it....no more excitement about flying objects than that.   Sigh.

No leading me to pulling out the turkey basters and shot glasses.  No flying objects launched from plastic spoons.

I looked around the room feeling quite deflated.  I really wished they would have dove deeper into the concept of flying as there were so many learning opportunities waiting for them there.  My adult brain was so ready to give them more opportunities...it was suppose to have been a morning so rich with learning.  Instead, it was just a ho-hum kind of a morning.

My brain had an inner struggle: STOP THEM...TELL THEM TO MAKE THINGS FLY/   DON'T STOP THEM...THEY ARE ALL INVOLVED IN THEIR OWN, CHILD-LED TASKS AND IT'S OKAY.

The "STOP THEM" argument ALMOST won, but then I had a moment to skim through the pictures I had taken thus far that morning.  And what I saw simply amazed me.  The learning was SO CLEAR in hindsight.

This is what I saw:

A child was learning through cause and effect, and comparing and contrasting as she related how far she pulled the catapult back to how far the stuffed mouse would fly. 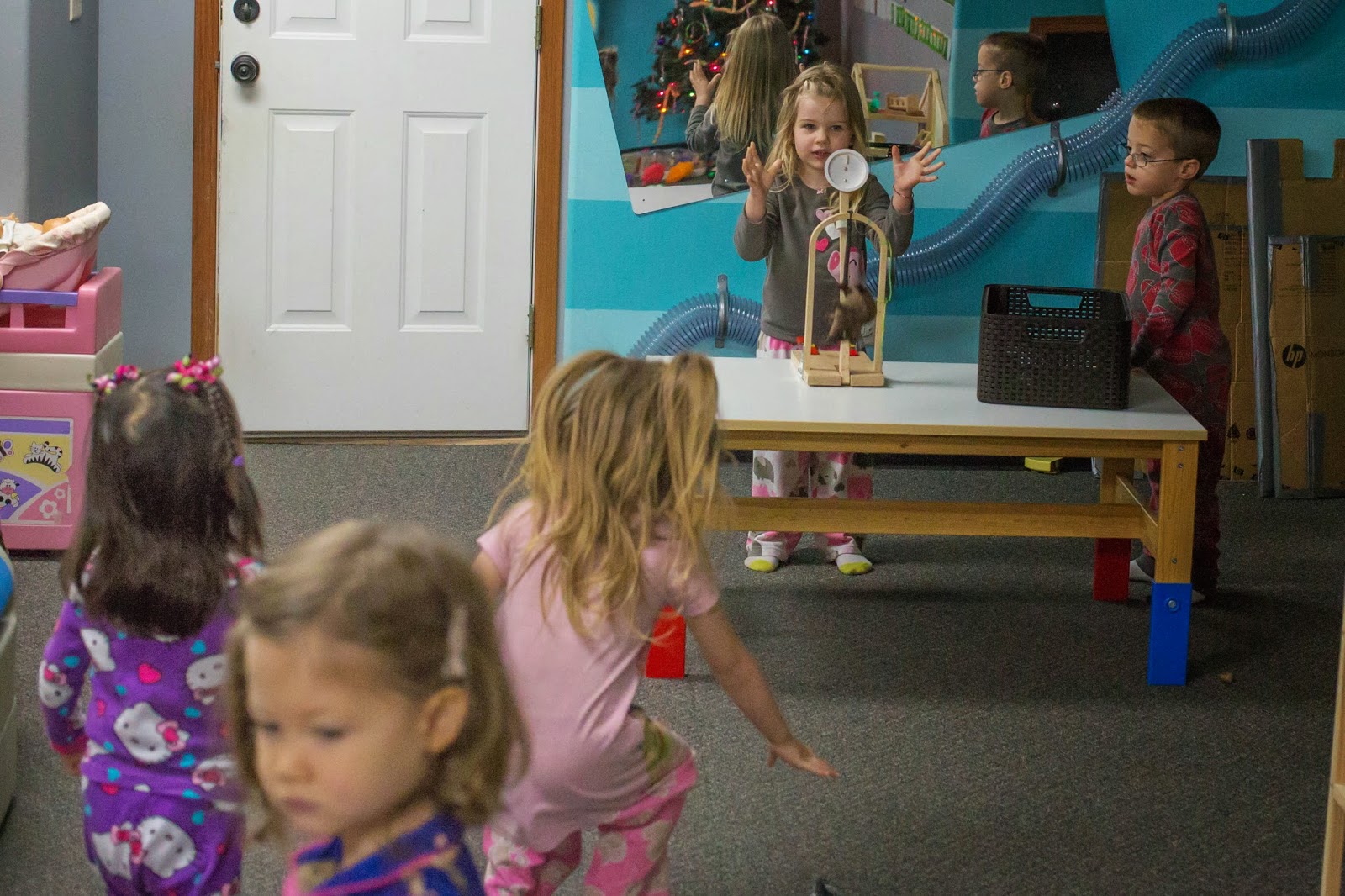 A child was learning about weight and numbers as he figured out if the mouse or the green ping pong ball was heavier. 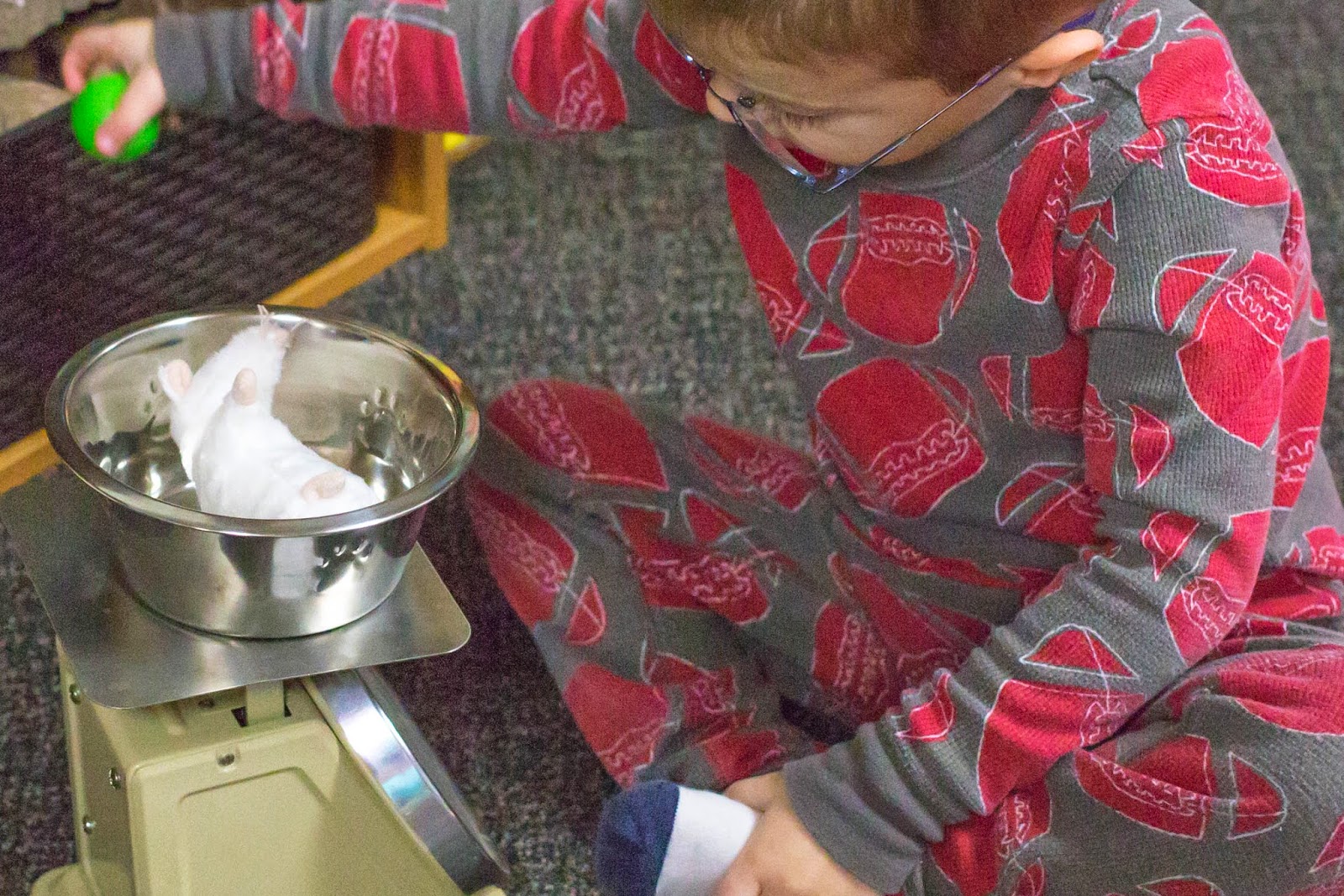 A child was empowered from the opportunity to organize his friends in order to accomplish a task of his choosing.  What was the task?  He wanted to make the wrapping paper fly using the parachute.  He couldn't do this alone. 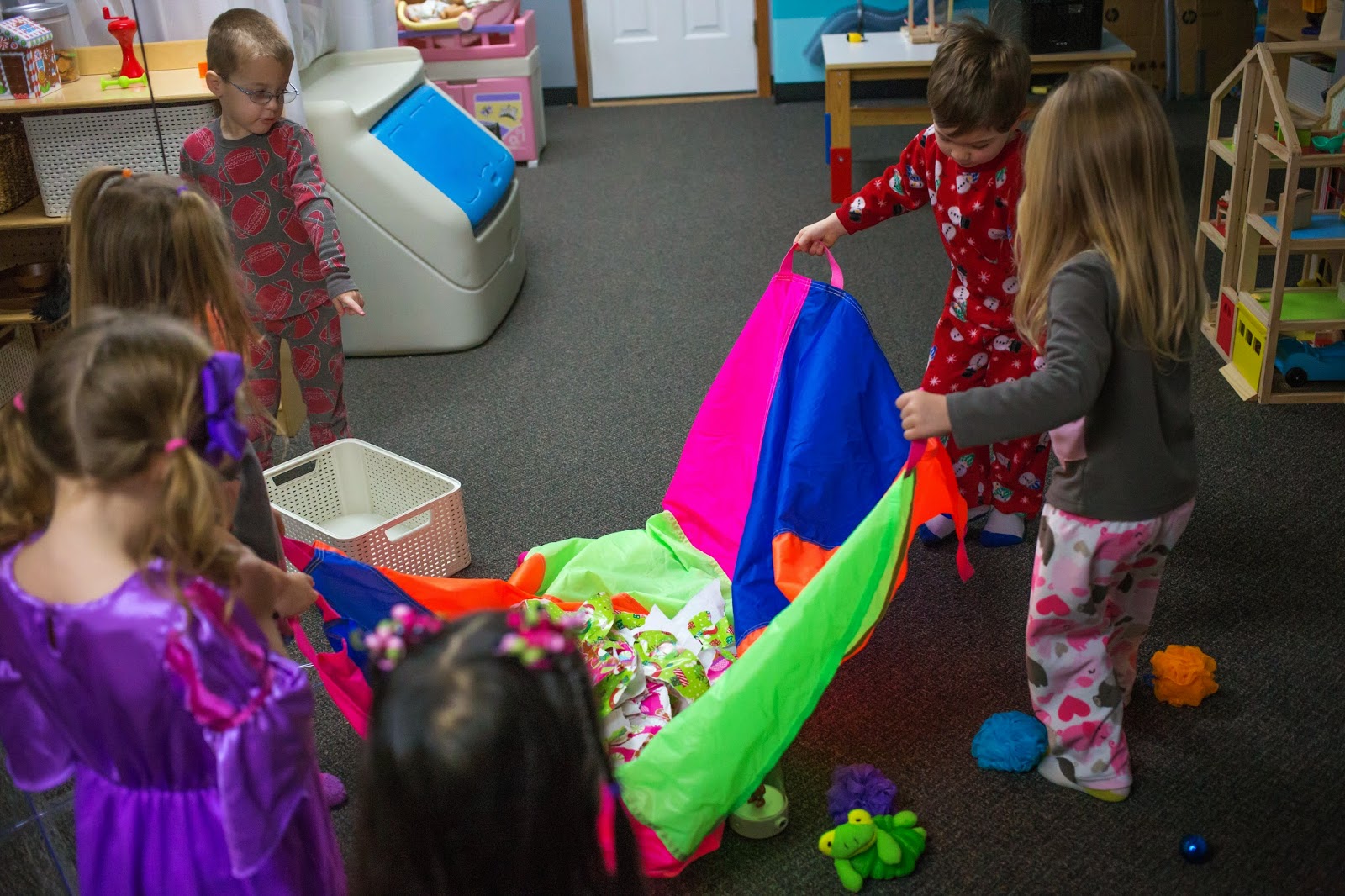 Children were utilizing teamwork to accomplish a task.  The child in the red snowman jammies is orchestrating this endeavor, and he did a fine job with it. 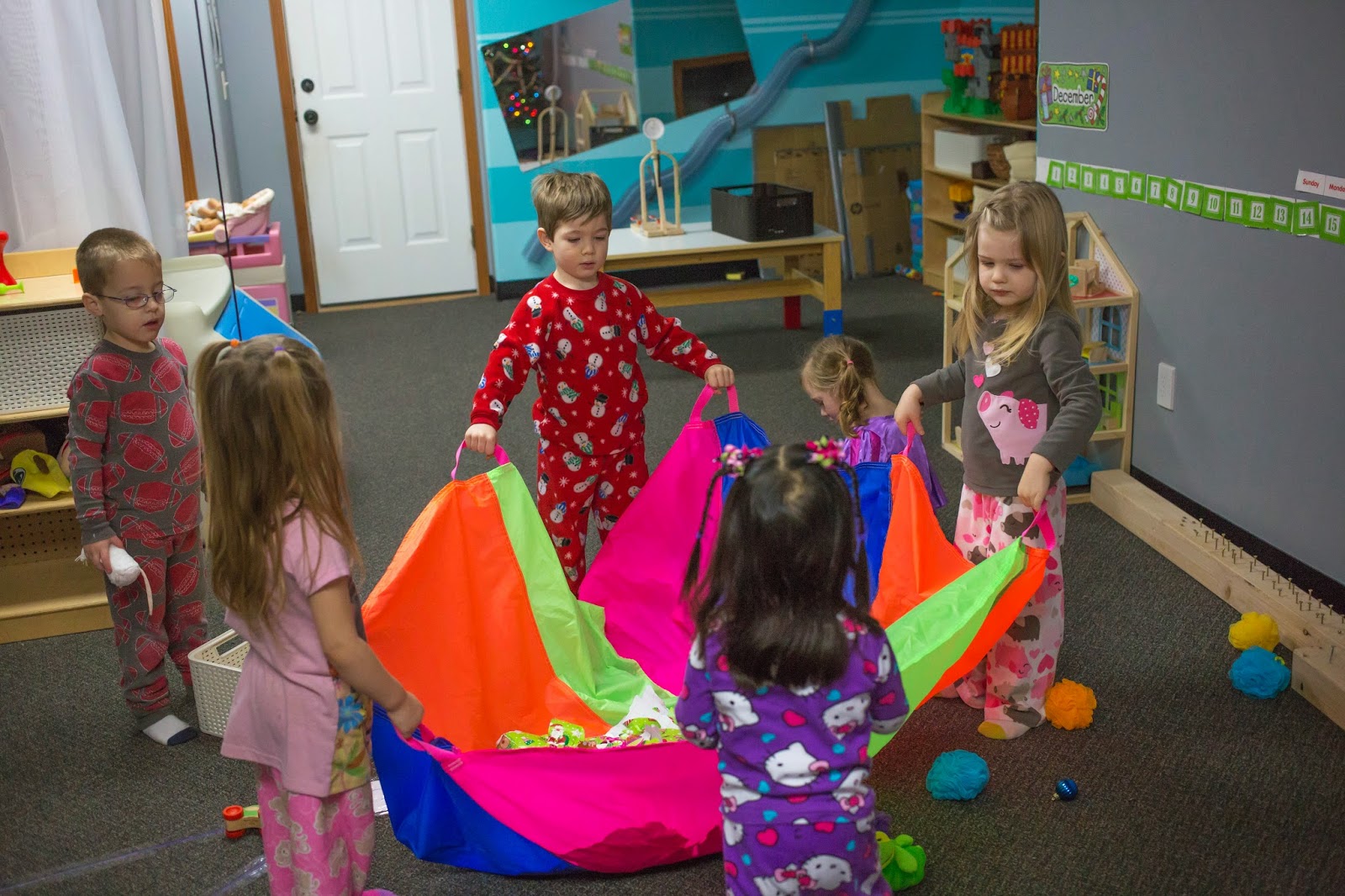 Children were making connections as they manipulated their bodies in different ways.  Exploring the purpose of different muscles and the effect it has on the task at hand. 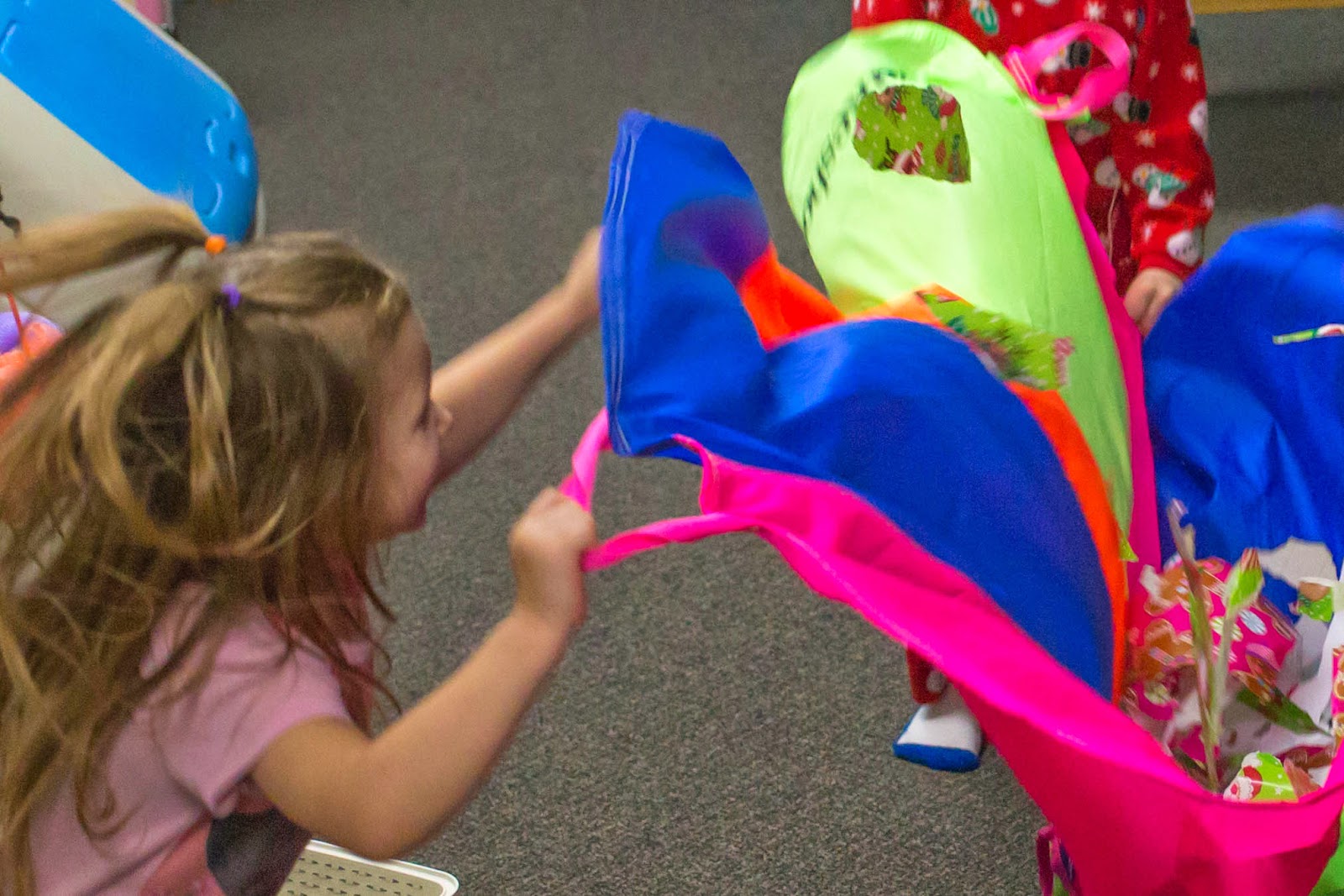 Children were having a whole lot of fun.....one just can't have too much belly-laughing in their day! 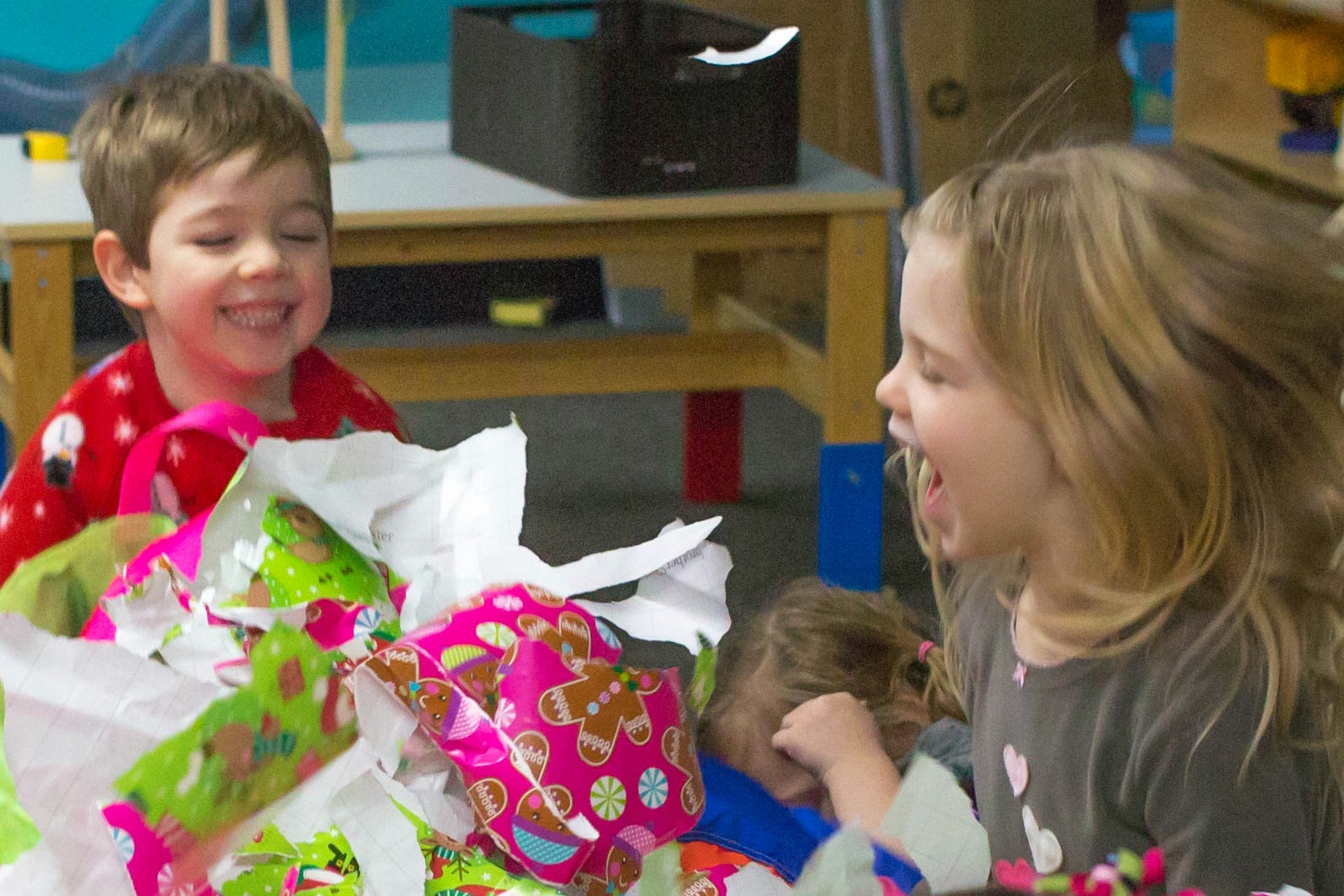 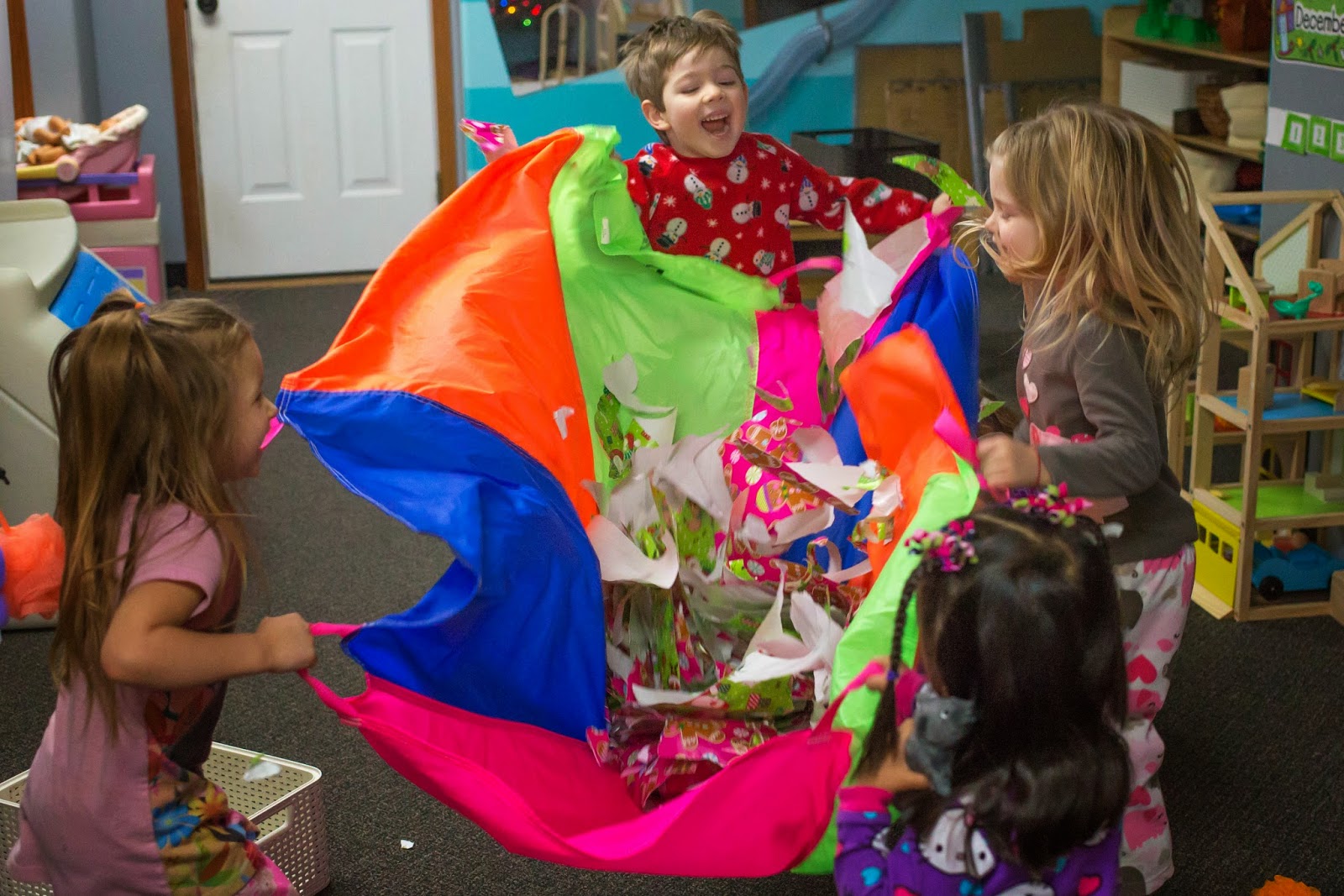 Children were multi-tasking.  This child was determined to hold onto the mouse AND move the parachute at the same time. 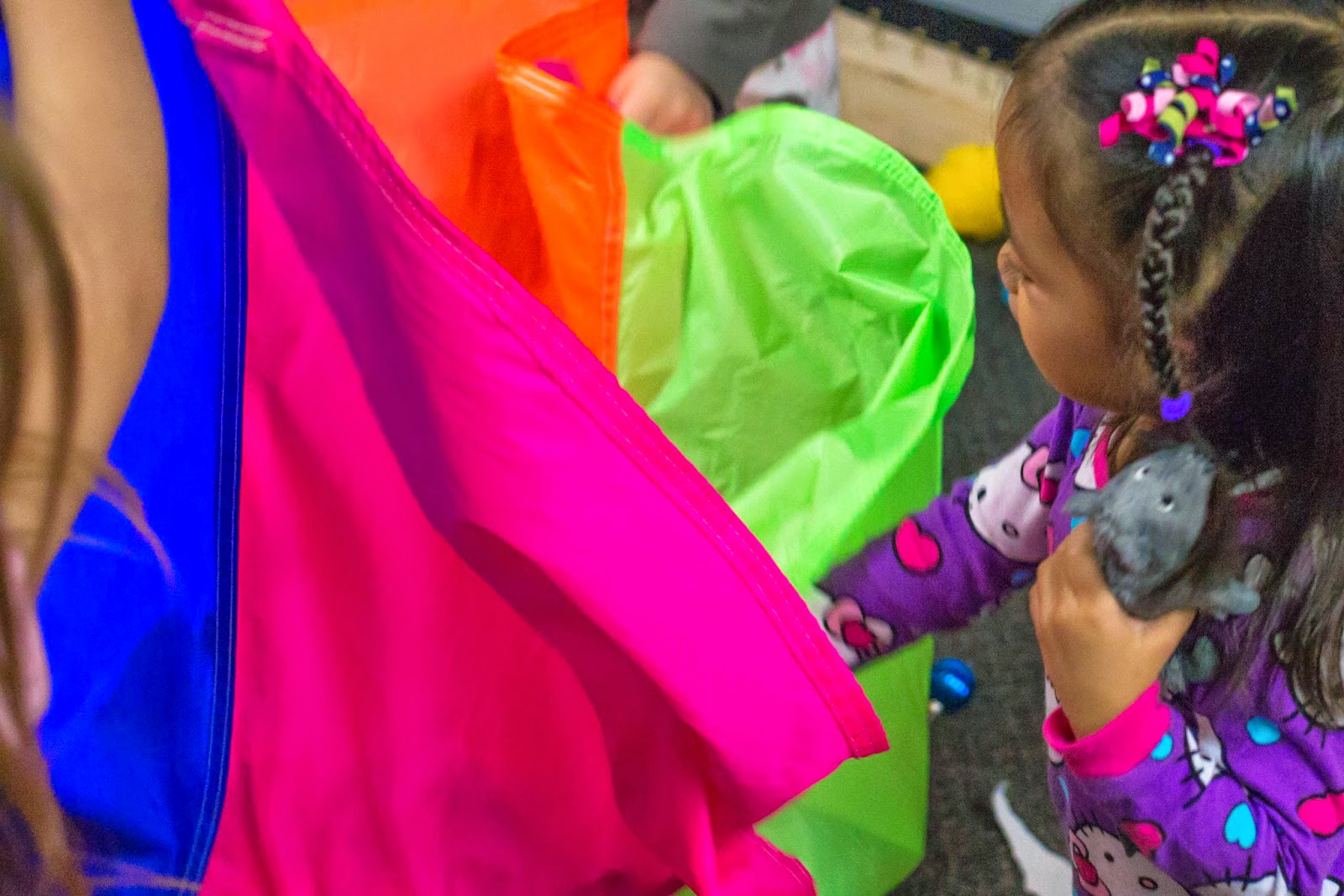 Children were learning the importance of focusing and being careful.  This child switched his focus from his drilling to where his mouse went for one second and the drill quickly turned off.  He learned that drilling requires two hands, and focus. 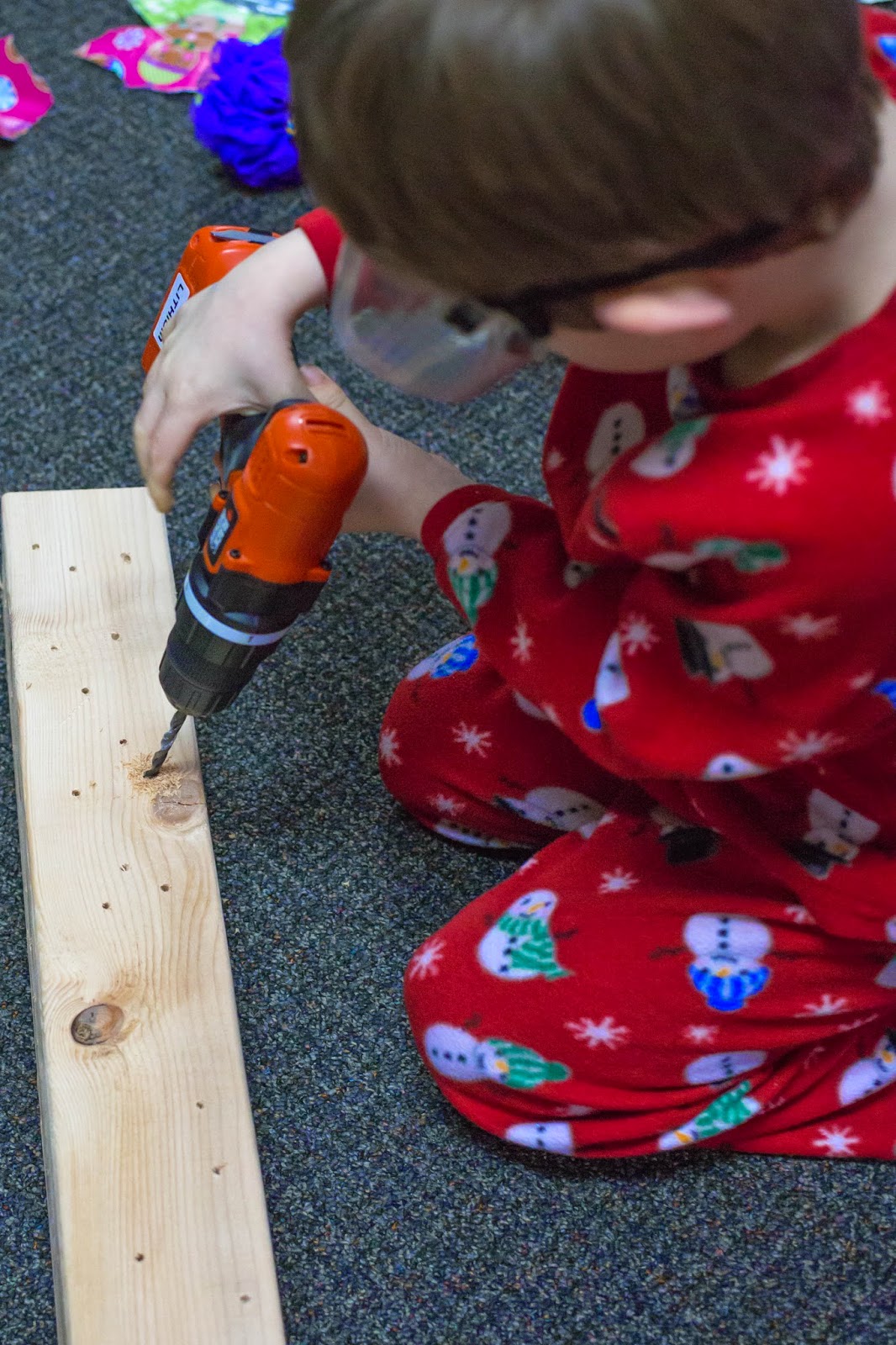 Children were learning that SLOW gets the job done better than fast sometimes.  This child was cutting out the star he had drawn the other day (using the giant dot-to-dot that is on our floor of a star)  I highlighted the lines that needed to be cut out, and he went to work.  He failed at his first attempt because he wanted to go FAST.  Well...guess what happens when you go fast with scissors?   You cut your paper in half!  So these are pictures of his second attempt....his SLOWER attempt. 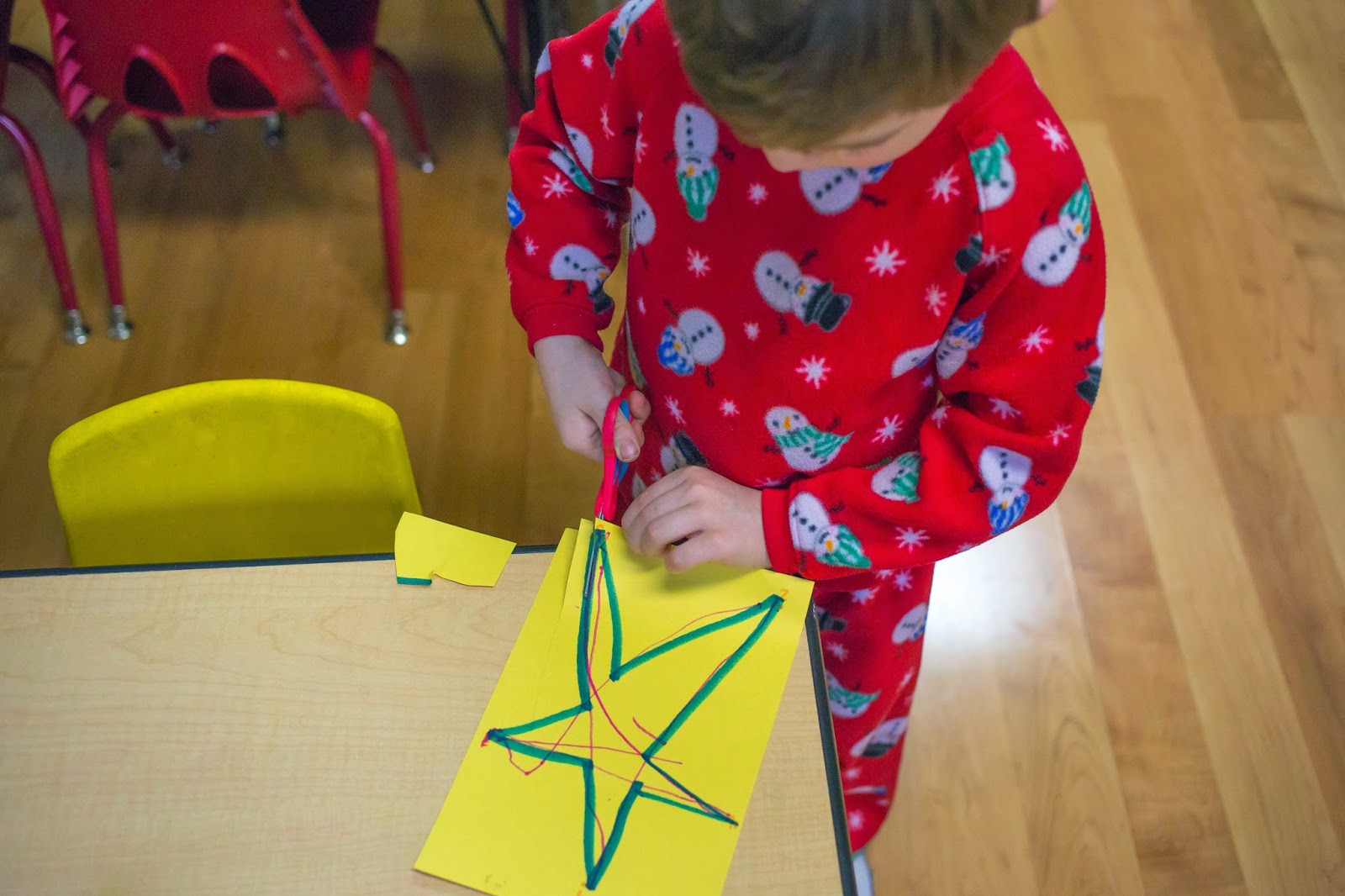 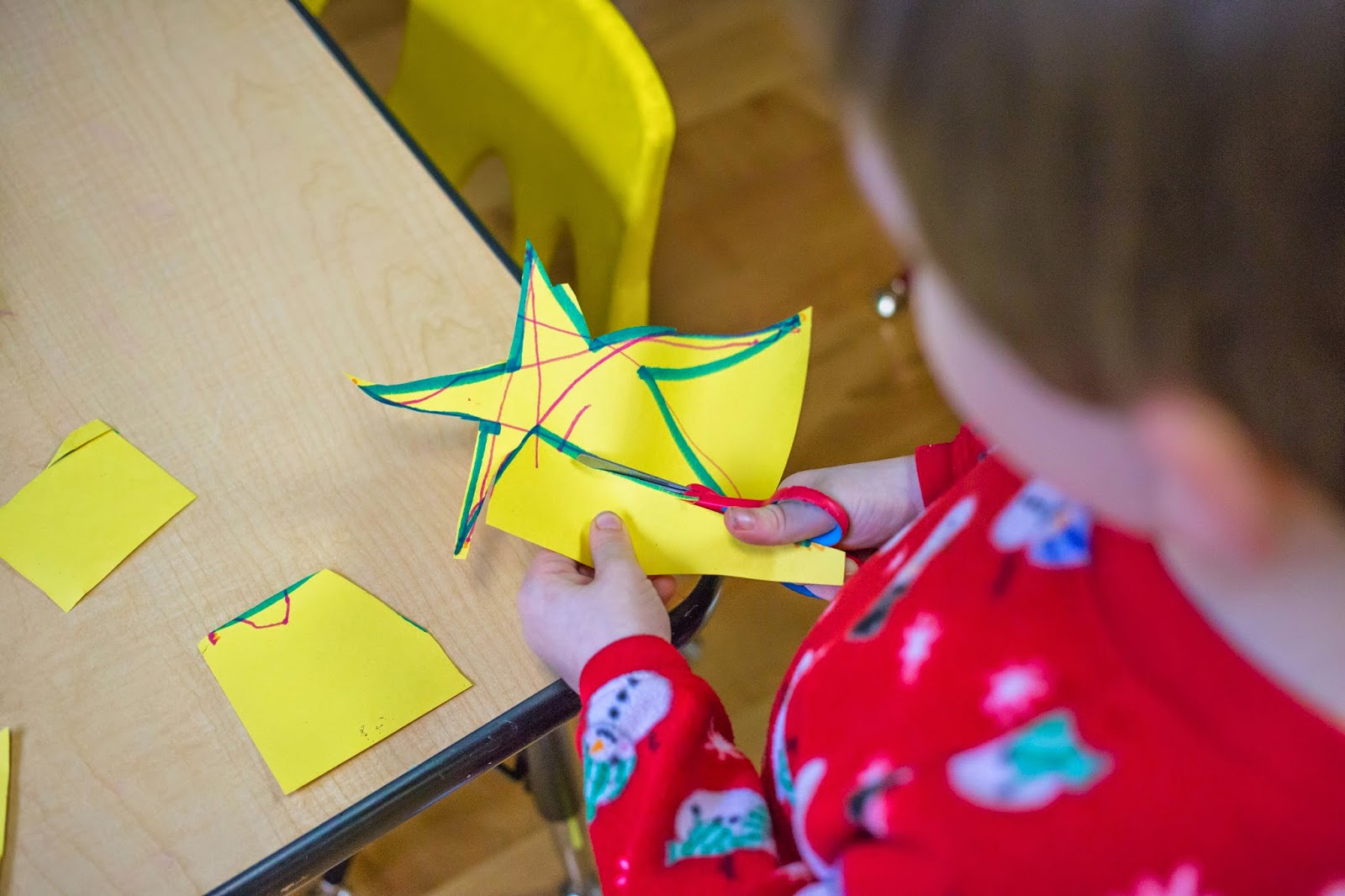 Children were feeling PROUD of their accomplishments.  Pride builds our self esteem.  A good self esteem gives children the confidence they need to try new things, to think outside the box to solve problems and persevere through struggles.  Arguably, these abilities are very important for all future learning. 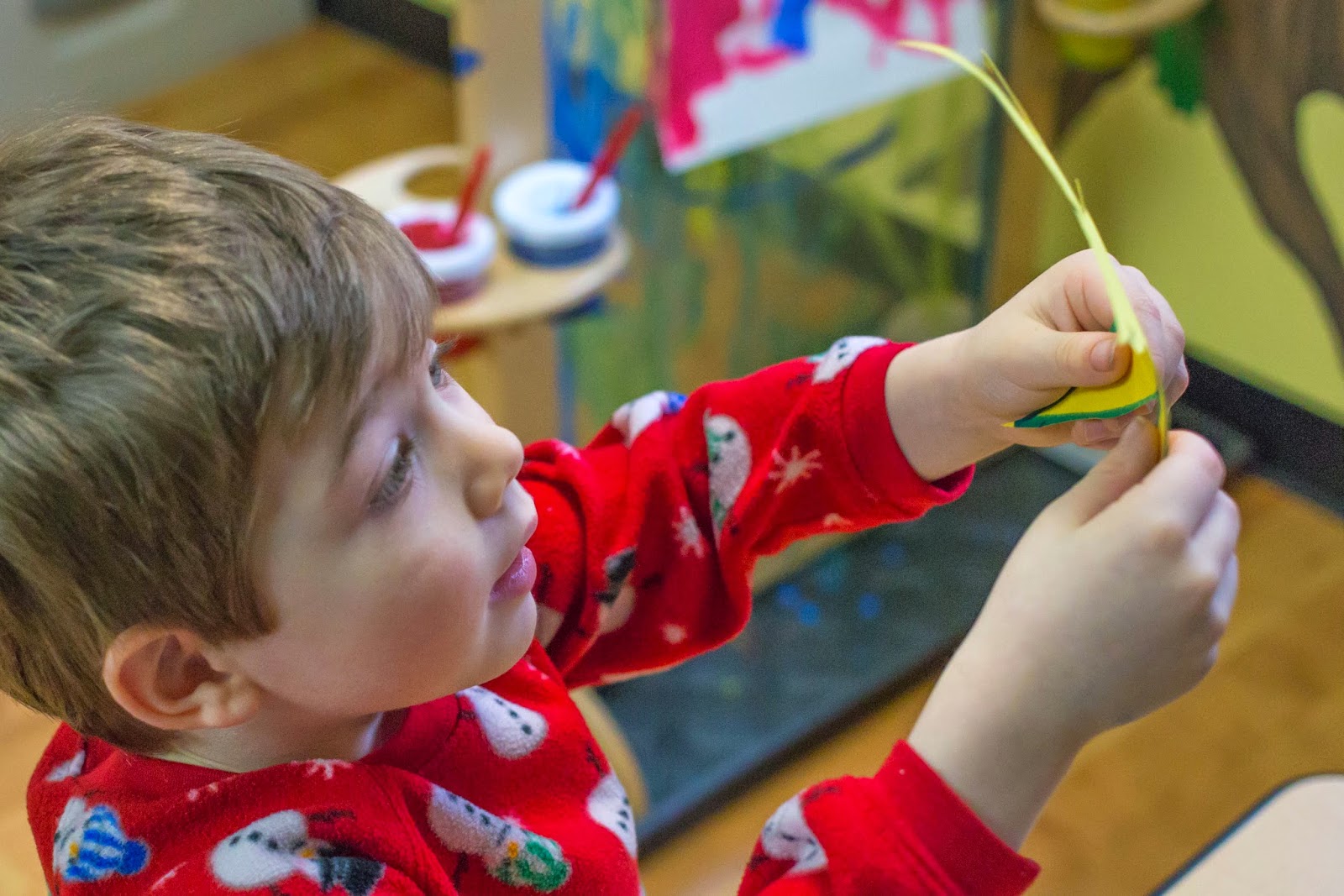 Children were motivated by sparkle.  The whole reason this child wanted to make a star?  He wanted to use the glitter!  He is finally enjoying the fruits of his labor.....GLITTER!! 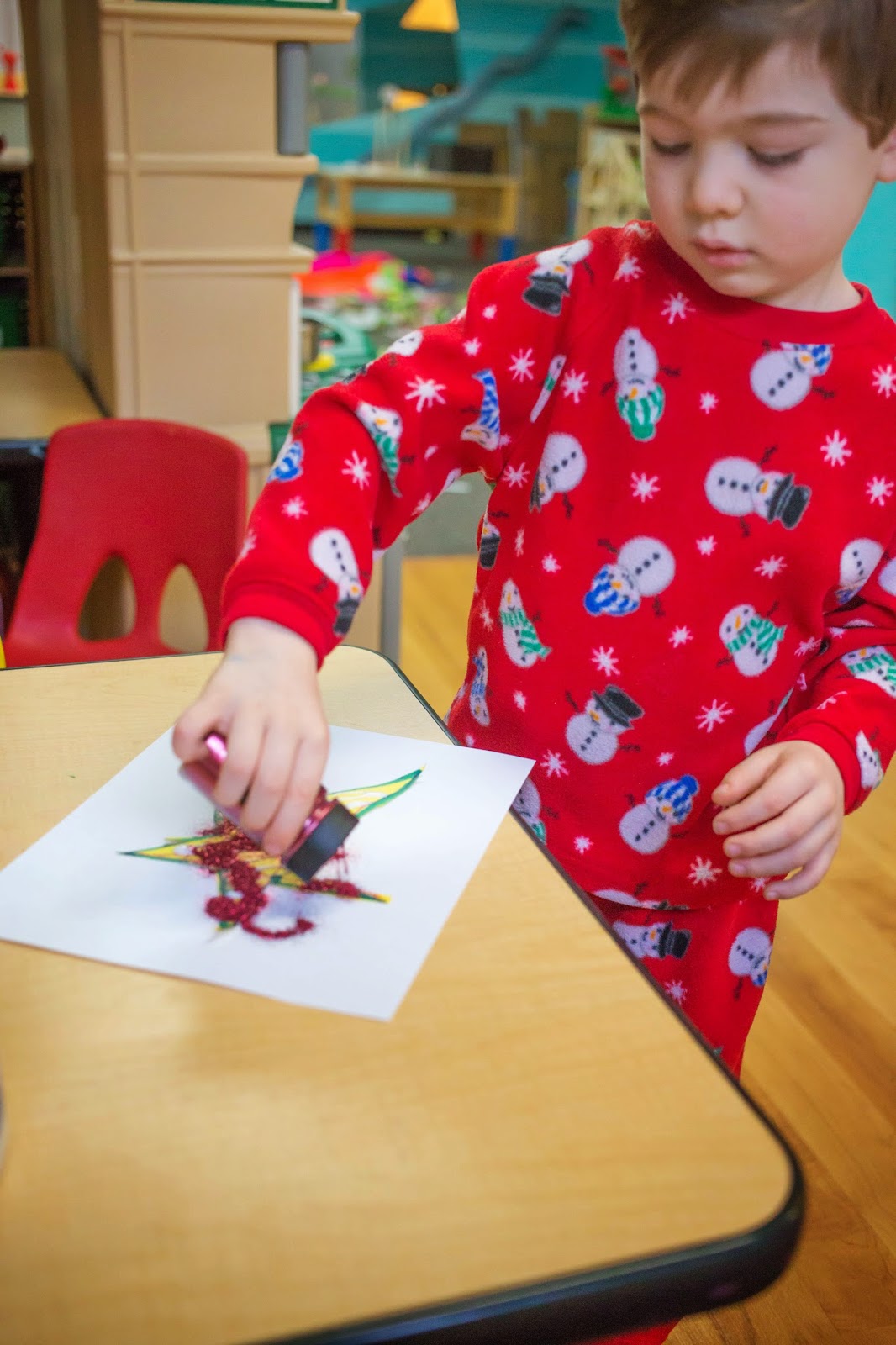 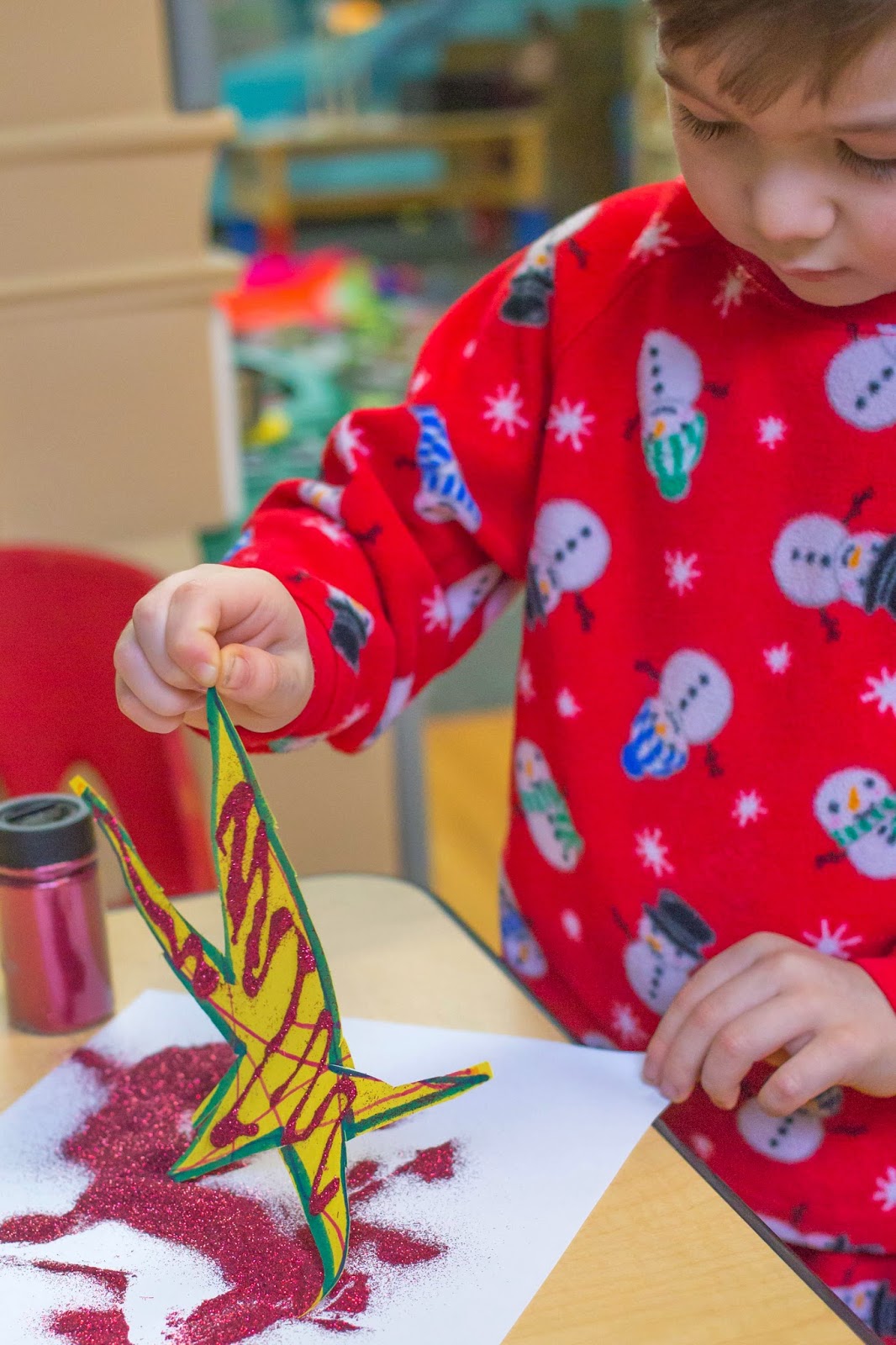 Children were AWE-inspired from their own hard work. 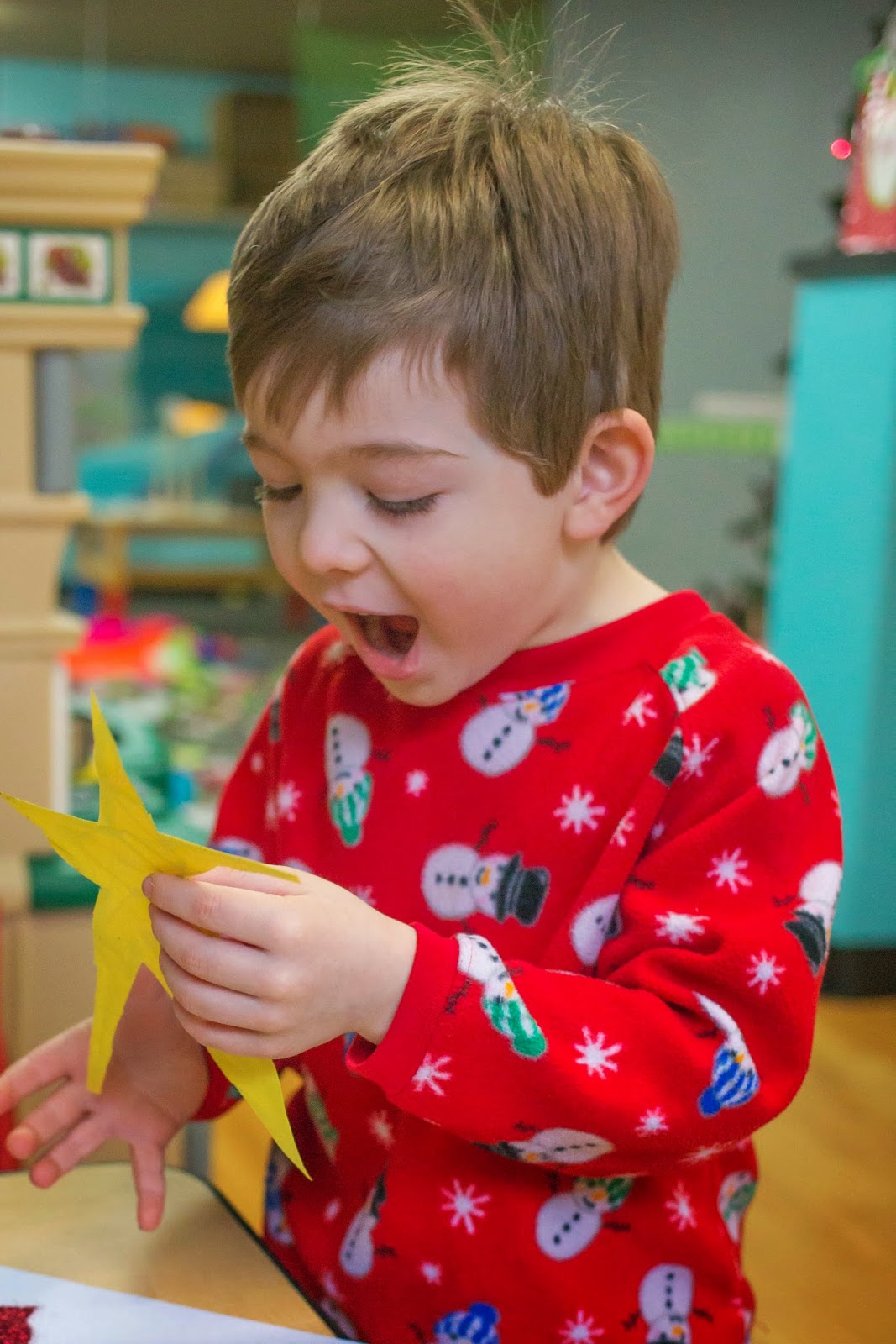 Children were learning they can make something happen (see the spinning mice?  The one on the left is gray, the one on the right is white) 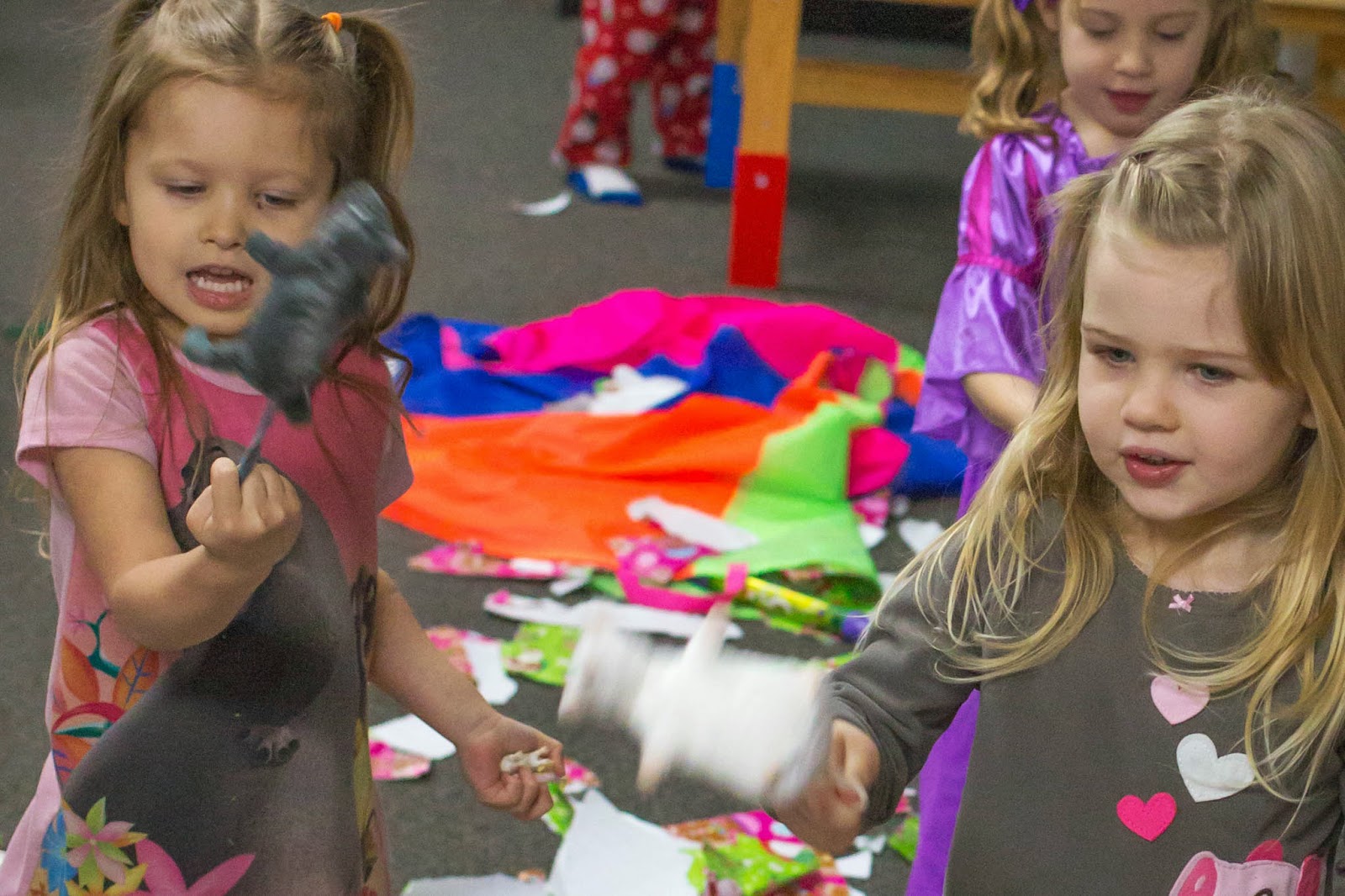 Children were discovering problems.  See the balls clogged in the crazy tube? 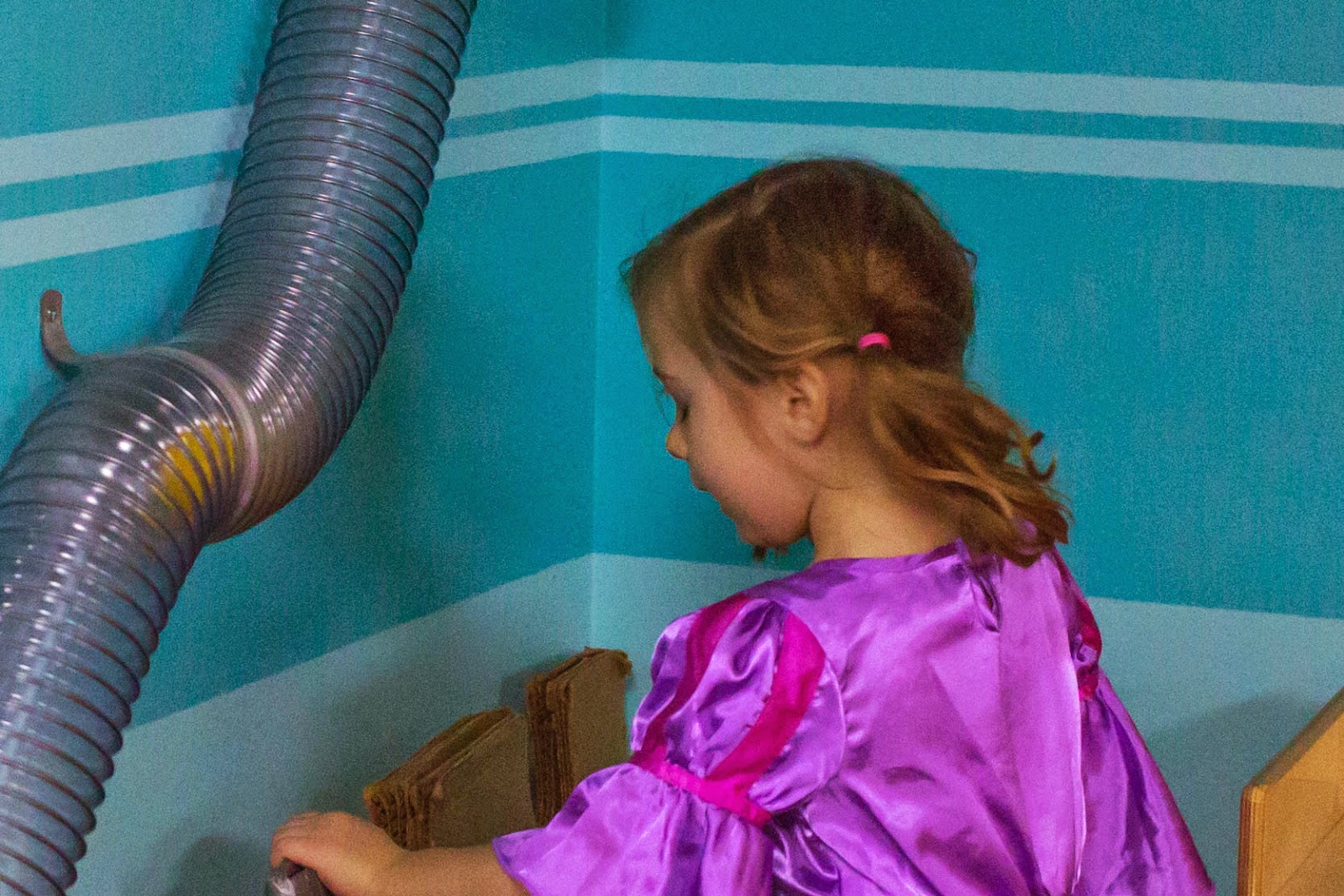 Children were collaborating ideas in order to solve a problem.  The problem?  Balls were stuck in the tube. 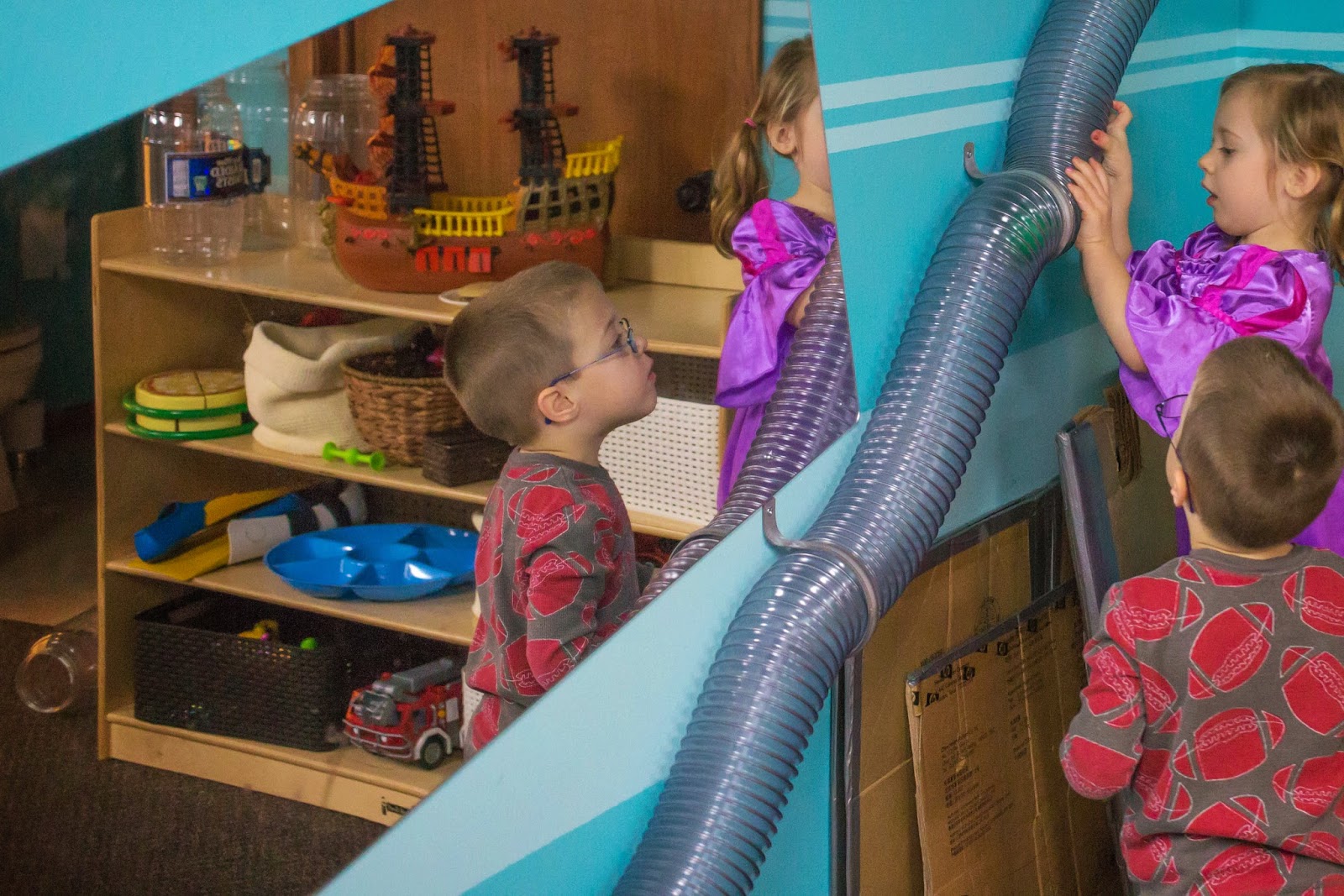 Children were learning the boundaries at play school are in place for a reason.  The boundary (aka: rule) for the crazy tube?  BALLS ONLY.  WHY?  Because all other objects will get caught.  What was causing the clogged tube?  A teensy, tiny mini eraser had been placed in the tube.  It is small then an inch big, and it was causing the blockage.  This child is hitting the tube in order to get the eraser to slowly shimmy on through.  When she was finished she looked at me and said "I won't ever do that again.  That was hard work" 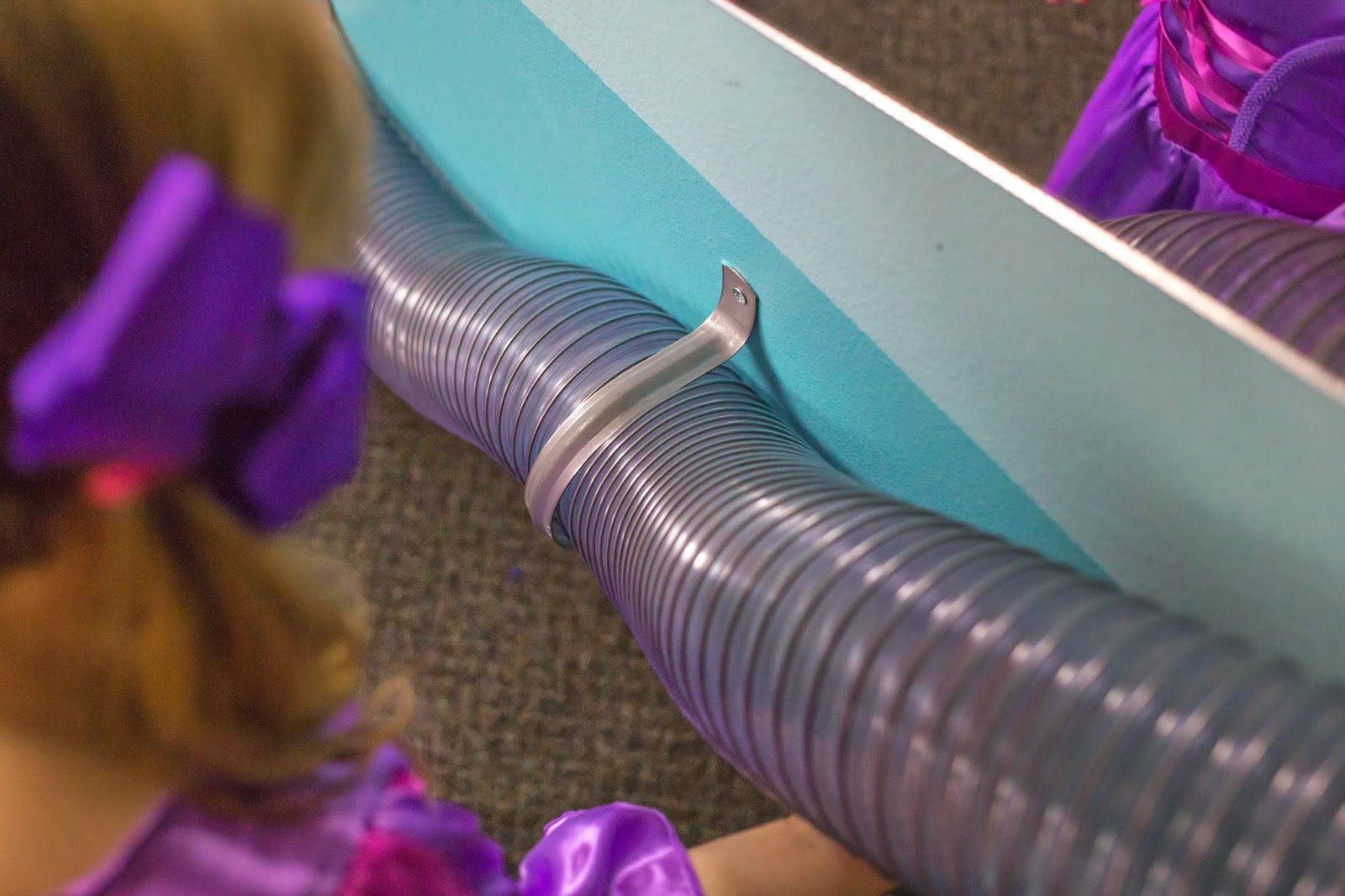 Children were learning that making a mess is far more fun then picking it up.  However, when you add tools to the job (like the "grabbers" in this child's hands) it's a lot more fun! 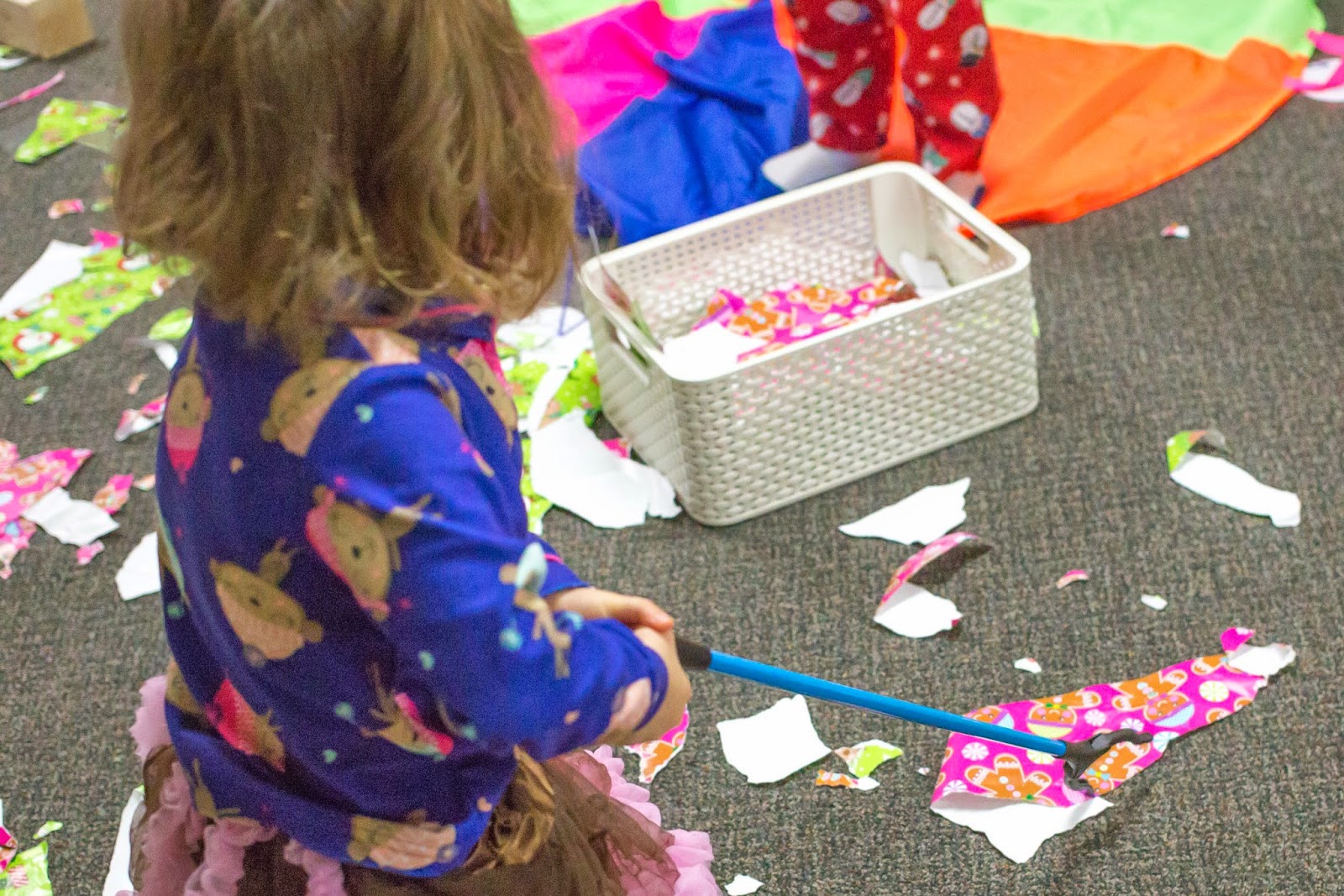 Children were discovering their own technique for accomplishing tasks and using tools.   This child was having  a hard time being successful.  She changed up her technique several times. 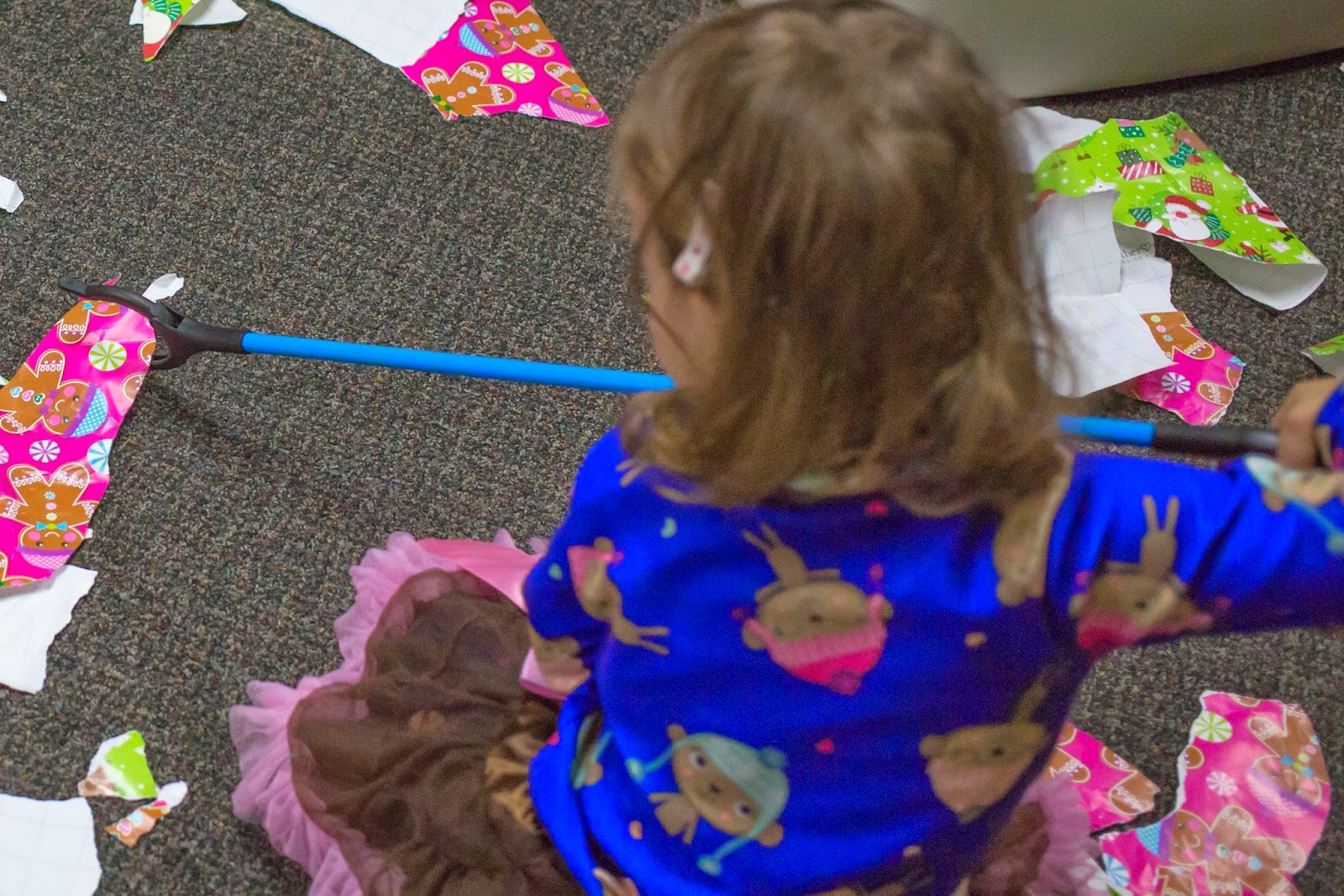 Children were persevering.  This child worked on this very task for well over 5 minutes.  Testing out different techniques and tweaking them ever-so-subtly with the hopes of finding success. 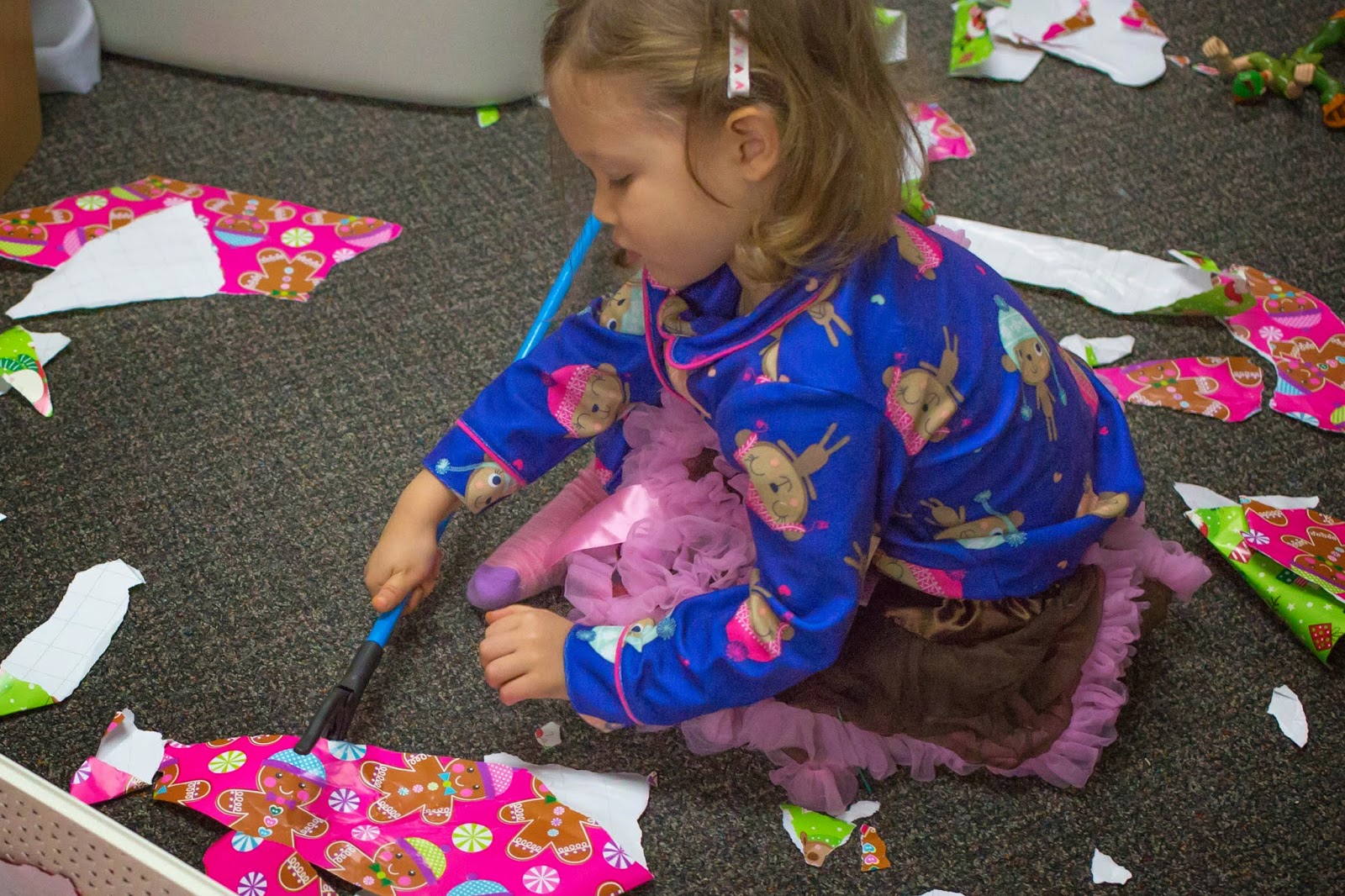 Children were learning that sometimes things are really hard, and a big deep breath and a break can help. 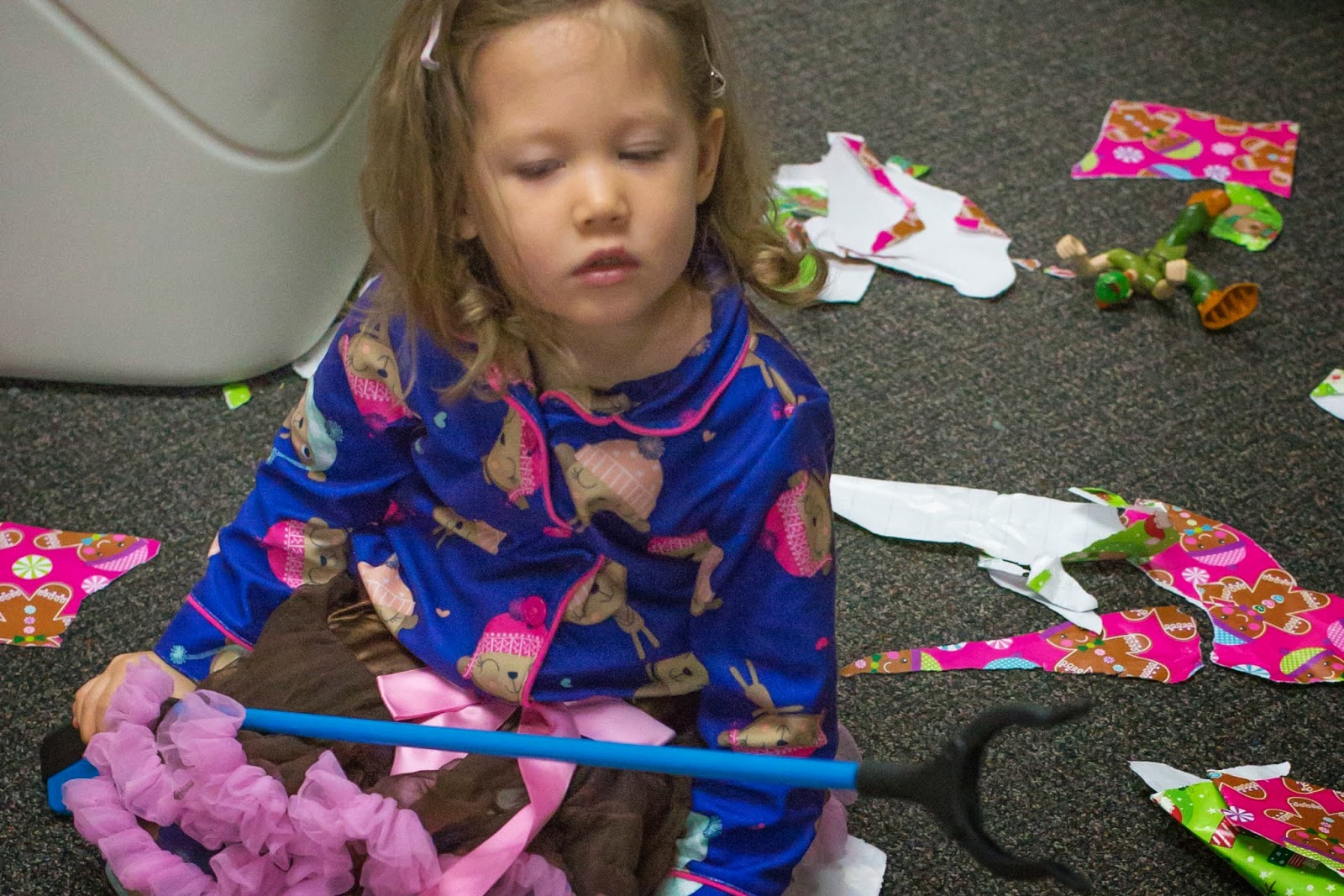 Children were learning that success feels really good, but can take a lot of work! 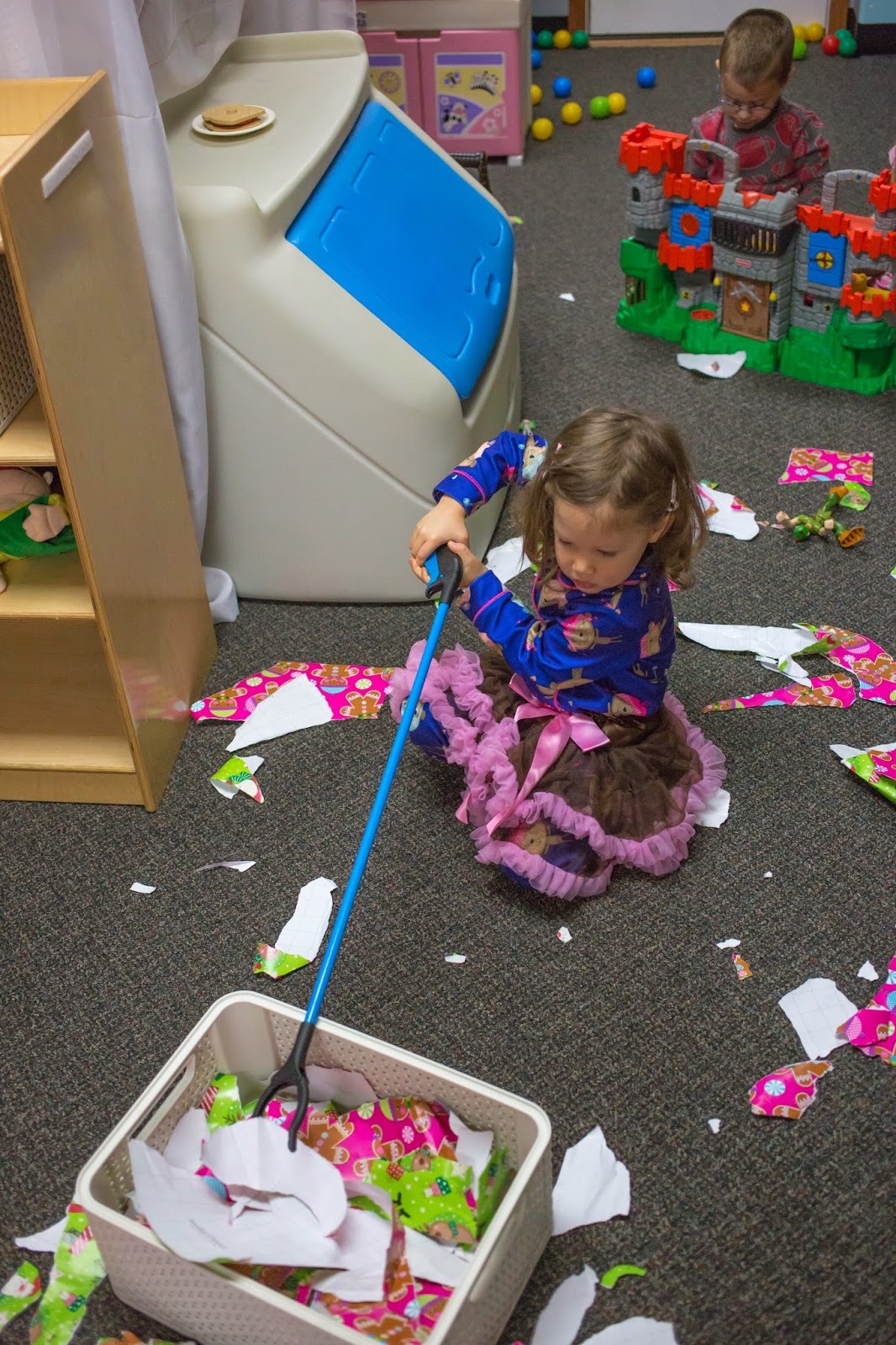 Children learned that in the middle of picking up, it's okay to take a break and PLAY!!  This child is gathering up as much wrapping paper as he can so he can make them fly! 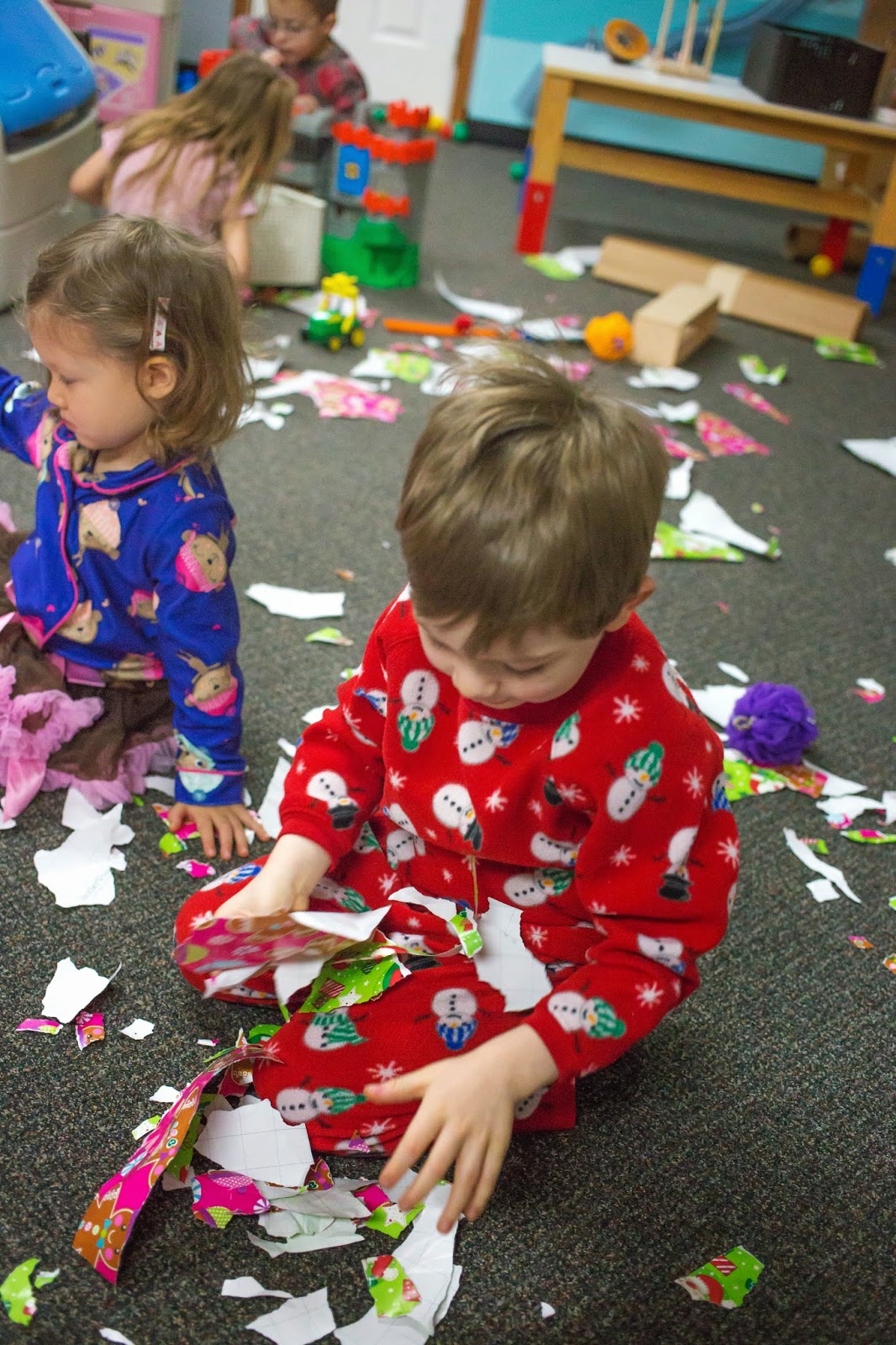 Children were tracking items in space with their eyes.  A necessary skill for future reading success. 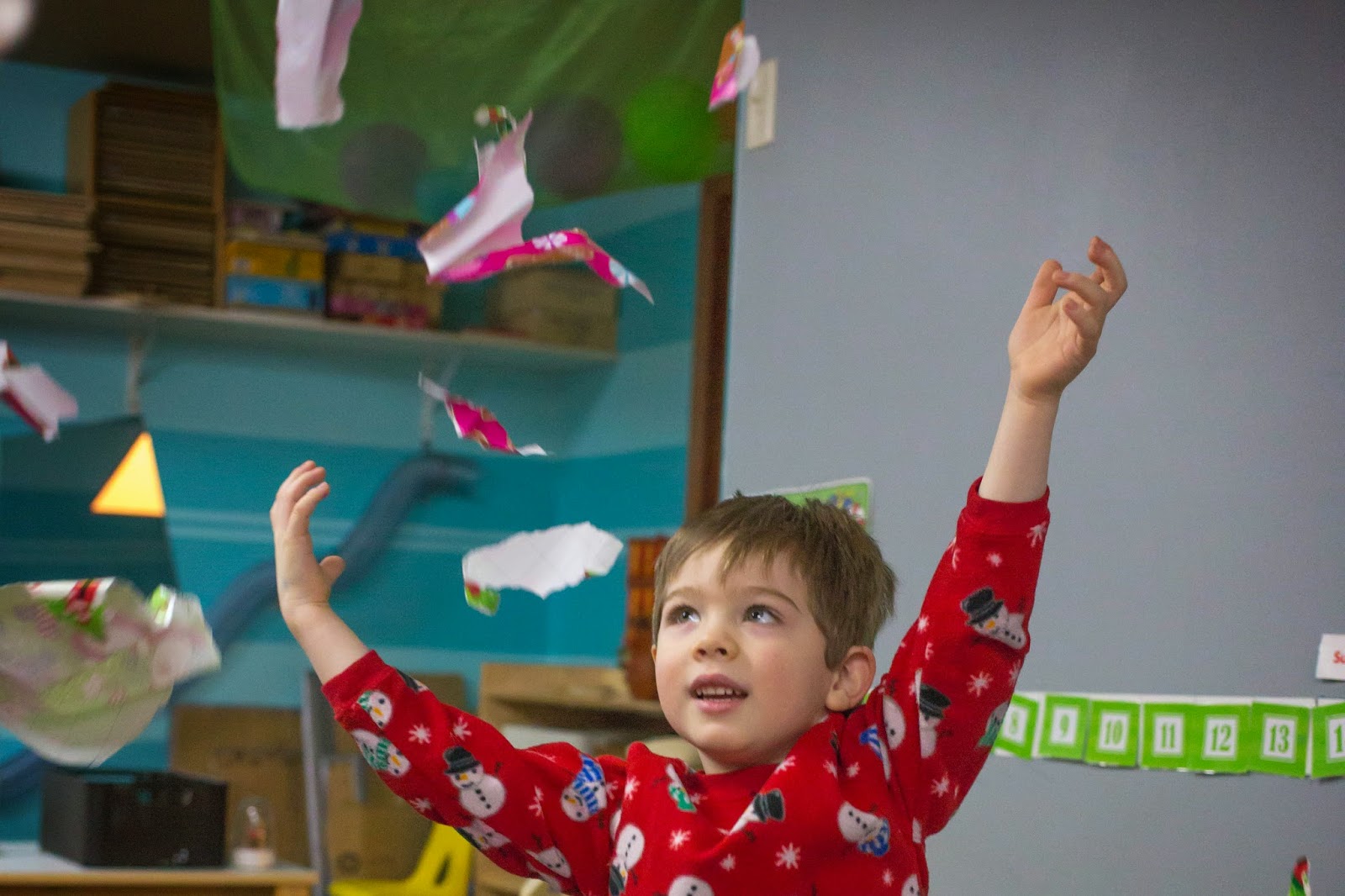 Children had the freedom of technique.  This child is decorating the tree....ALL from a comfortable seated position on the floor.  (notice the saturation of candy canes? :) ) Is this the way our adult brains would do it?  NO.  Is it okay though?  YES.  It's times like this that can be very challenging to hush the adult brain and just let the child own the experience. 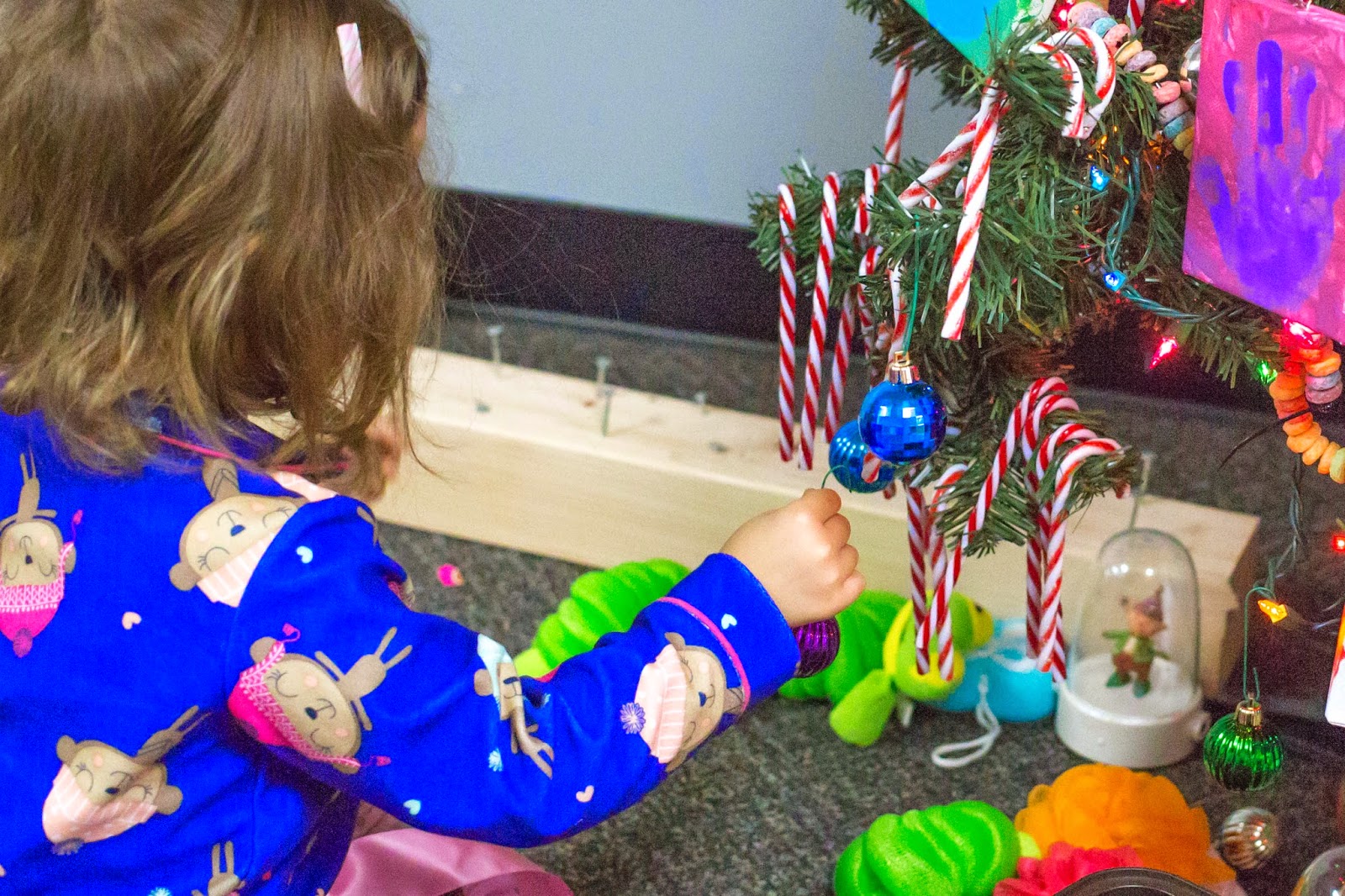 Children were recognizing numbers.  During snack time, this child found a number 3 in her pretzels!! 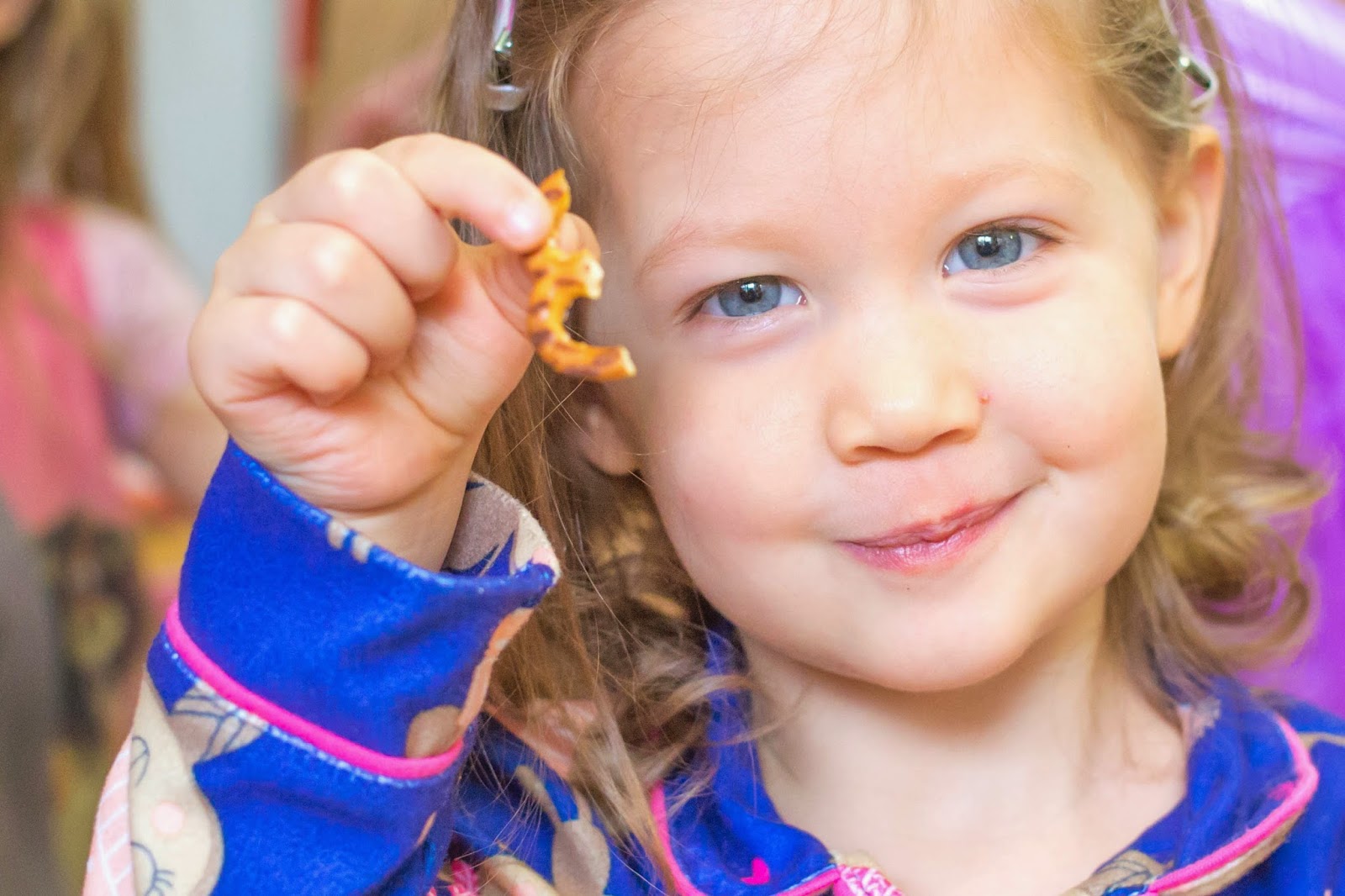 So, the next time you get that STRONG urge to stop child's play in order to make them follow your adult plans....please take a moment to STOP YOUR BRAIN instead of stopping the valuable child-led play that is happening before you.

I highly suggest adding photo documentation to your program.  As you just witnessed:  the pictures tell it the best!

There was no reason for me to stop the child-led learning that was occurring in my program.  The value was right there in front of me, I just needed to stop my brain, and take a moment to really SEE the value.

Posted by Denita Dinger at 2:07 PM