The Power of ONE Word

One word.  That's it.  One word set the stage for a morning filled with unexpected learning.  It was a beautiful symphony of the children leading, and my following while quietly enhancing their ideas.  Here's how it all went down:

The mystery word for the day was "up".


Mystery word, or word of the day is a brilliant idea my good friend, who I affectionately refer to as "my Jenn" came up with.  This is how it works at my program:

I pick a word that will cause curiosity or intrigue.  A word that might spark imaginations or is full of potential fun.  A word that the children have LEAD ME TO.  When choosing the mystery word, I try to pick a word that enhances the children's interests and ideas.  It's a word that MAY lead my crew in a way that I am prepared for, but usually, the direction they take it in is far more fun and loaded with way more learning then I ever could have imagined!

I hide cut-out letters that make the mystery word, then write the word on a card and hang it on the wall.  I've also tossed a huge pile of letters all over the floor and we go on a letter hunt as I just call out what letter is needed next.  There are many ways that you can plop the letters out there.

When the letters are hidden, the children need to work together to
1) Find them  (All of my littles take great pride in finding a letter!  This is part of the Mystery Word concept that transcends all skill levels.  ALL children feel empowered when they find a letter.)
2) Identify them (It is empowering for children to teach each other.  They love to help a friend identify a letter.)
3) Place them in the right order according to the "map" (The index card with the "Mystery Word" on it serves the purpose of the "map".  There is a great amount of visual tracking and planning, not to mention comparing and contrasting involved in this step.)
4) Sound it out.  (The Mystery Word is a great tool for teaching children the letters in a meaningful way.  Instead of separating out the recognition of letters from the purpose of them....the Mystery Word combines the two concepts and adds more meaning to the learning.  This is a word.  These are the letters.  Each letter makes a sound.  We put letters together to make words.  It is also key that the mystery word is a word that is important at THAT TIME to the children in your program.)

I love to see young children working together towards a common goal.  It is a life-long skill to work together and to cooperate with others. All of these things are done while the children are playing. We do not do a specific time to find the letters. They are found sporadically during play.

In addition to the Mystery Word, my crew has naturally, and quite proudly shared other words they know that begin with the same letter as the mystery word.  This happened organically, and has caught on in my program, and thus happens frequently.  SO, we usually have a word list that accompanies the Mystery Word.  For example, our current mystery word is "tube".  Along side the mystery word is a "Tt" list.  Thus far, we have tube, tic tac, toes, tie, tower, tall, ticket and table on that list.  All of those words were randomly announced by my crew as they popped into their own conversations during play.

The mystery word was "up".  I cleverly hid the letters UP on the ceiling.  Letter "p" was in the open, but letter "u" was a little more descretely hidden in the shadow of a light.  "P" was found immediately  by a 2 year old that I could lift up to grab the letter from the ceiling.  (The rule is...if you find it, you get to retrieve it.)

Cole discovered the letter "u". 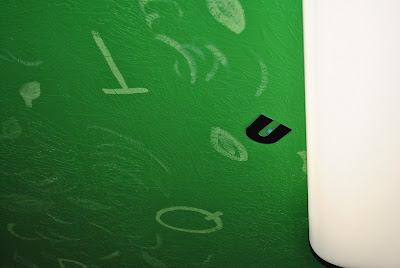 Cole is 5. I can't lift him up. As soon as he found the letter, he grabbed a chair to stand on (let's face it, there are times when standing on a chair is necessary...plus..independent problem solving...I LOVE IT!), but it did not even come close to lifting him up enough.

Ty was quick to suggest that Cole use the grabbers (more on the grabbers later), but standing on the chair AND using the grabbers STILL did not get Cole up high enough.  I asked a simple question:  "What else can we use that will get Cole up?"

An answer came quick: "A ladder !!!"
So out to the garage I went....to fetch the ladder!  I love letting young children solve problems!  Using what they know to solve problems is a huge esteem booster!  There was so much learning even in the suggestions that did not work!  Trial and error is one of the very best ways to learn.


﻿
If one child gets to climb a ladder....guess what everyone else wants to do?  Climb UP a ladder!  We spent the next 20 minutes taking turns climbing UP...with varying degrees of braveness.


When the novelty of climbing the ladder had faded, and the cheering was getting old....we moved on.  I posed another simple question.  "What else can we do that will make us go up?"

(I felt determined to figure out (and quickly) a way for them to SEE how high up they are jumping, I put my brain to work.  Luckily, my brain can do this most of the time.  If yours doesn't, practice, practice, practice because one of the requirements of following young children is to be quick on your feet!) 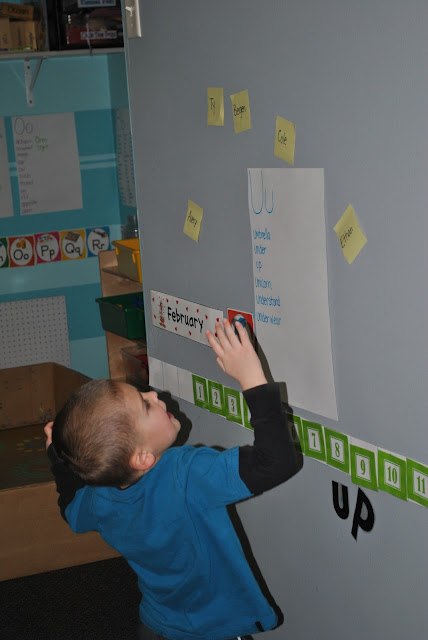 To the untrained eye, it was a room full of jumping children.  But, I could see the learning: we were measuring, comparing and contrasting, challenging ourselves, building self esteems, encouraging others, taking turns, using large and small muscles, coordinating our bodies AND having a BLAST!!

While the jumping continued, I prepared the stations for the day, adding to it one that was inspired earlier that morning with Ty's suggestion of using the grabbers to fetch the letter "u" from the ceiling.

I hooked a paper clip to a circle of yarn and hung them from the ceiling.  Then, without even thinking of the potential,  I quickly grabbed the only thing that I had that wouldn't rip while being grabbed with grabbers...the laminated letters we use to build the mystery word.

And so, we used the grabbers to reach things that are UP high, as Ty had suggested (and boy, was he proud that his idea really did work!).

Little did I know at the time what learning potential was hiding in this very simple, spontaneous moment.  In order to use a 3 ft. long grabber to retrieve a letter hanging from the ceiling, a person needs to use visual motor planning.  They need to plan out ahead of time where the grabber needs to go in order to successfully grasp the letter.  There is also a great small motor workout going on as they squeeze the trigger to make the grabber close in on their targeted letter.  A lot of problem solving, and trial and error as well.  My favorite skill that was being honed, however, was persistance.  This was NOT an easy task.  First of all, muscles have a hard time controlling a long stick, then, if that stick bumps the letter, it will start swaying, making success even more difficult.

But wait...that's not all.  Remember how I said I grabbed the letters without considering the potential learning, only the fact that they couldn't be ripped?  Well....guess what can happen when children are grabbing letters up high?
1)  Letter Recognition:  They say the letters (because they are proud they know them) and  they help each other identify the letters they are unsure of (they were lower case letters, so far more challenging then the capitals).
2)  They build new words with the letters they have captured!  (this was AMAZING to me!!  I did not see this coming at all, and I was completely thrilled!!)
3)  They take over their own learning!  Ty, Cole and Bergen are all 5 and in the last month have shown an increasing desire to know what things say, and to try to build words.  Here is the first word they questioned:

﻿
This is just more proof that if we are just patient, and listen, children will let us know what they are ready to learn!!

After changing out the letters, I posed a question:  "See if you can make the word "hat"".

It was interesting to watch them work together.
Cole was the first to start the word by saying "I've got the last guys!" (he had the "t").

Together, using teamwork, the three of them accomplished the task of building the word "hat".  I then asked if they could make the word "pat".  They quickly realized what letter they needed and went to work! 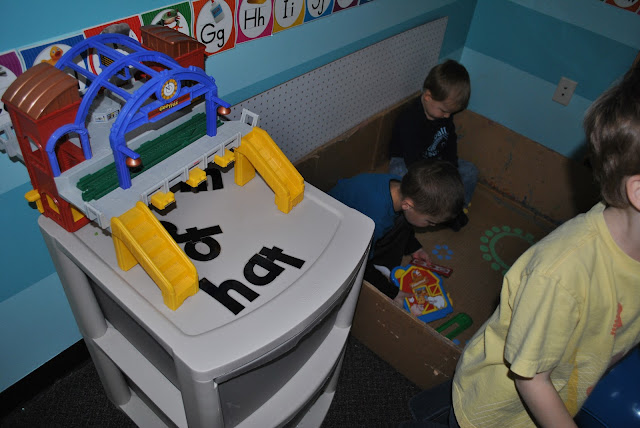 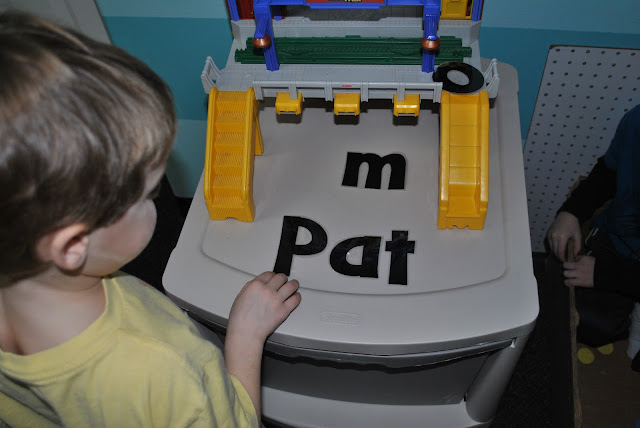 After lunch everyday, as the children are laying down, preparing for naptime, we read stories.  What book was read on this day?  One of our very favorites, "The Way I Feel" by Janan Cain.  This is a TERRIFIC book to use to review the morning's activities through feelings.  We all agreed we all felt EXCITED to get the opportunity to climb up a ladder, PROUD was another feeling everyone felt no matter how high they were able to climb, or how high they jumped or how many letters they could grab. SCARED was a real feeling for a lot of the children as they reached that height that caused their bodies to freeze up.  FRUSTRATED was how some felt when they were challenged by the grabbing station.  We talked about how when we feel frustrated sometimes it's good to take a break, and come back again.  Bergen was a good example of this and she was proud to say "but I tried it again and that time I could do it!"  The thing I like most about this book is it's a great way to validate all feelings and to reassure children that the way we feel is OKAY.  This book could be a blog post on it's own (hmmmm...add that to the list)

Now then, a few things for you to do: