Do you ever have a moment of spontaneous geniousness?

Not sure what I mean?

This was the scene that greeted my crew on a cold Monday morning in January: 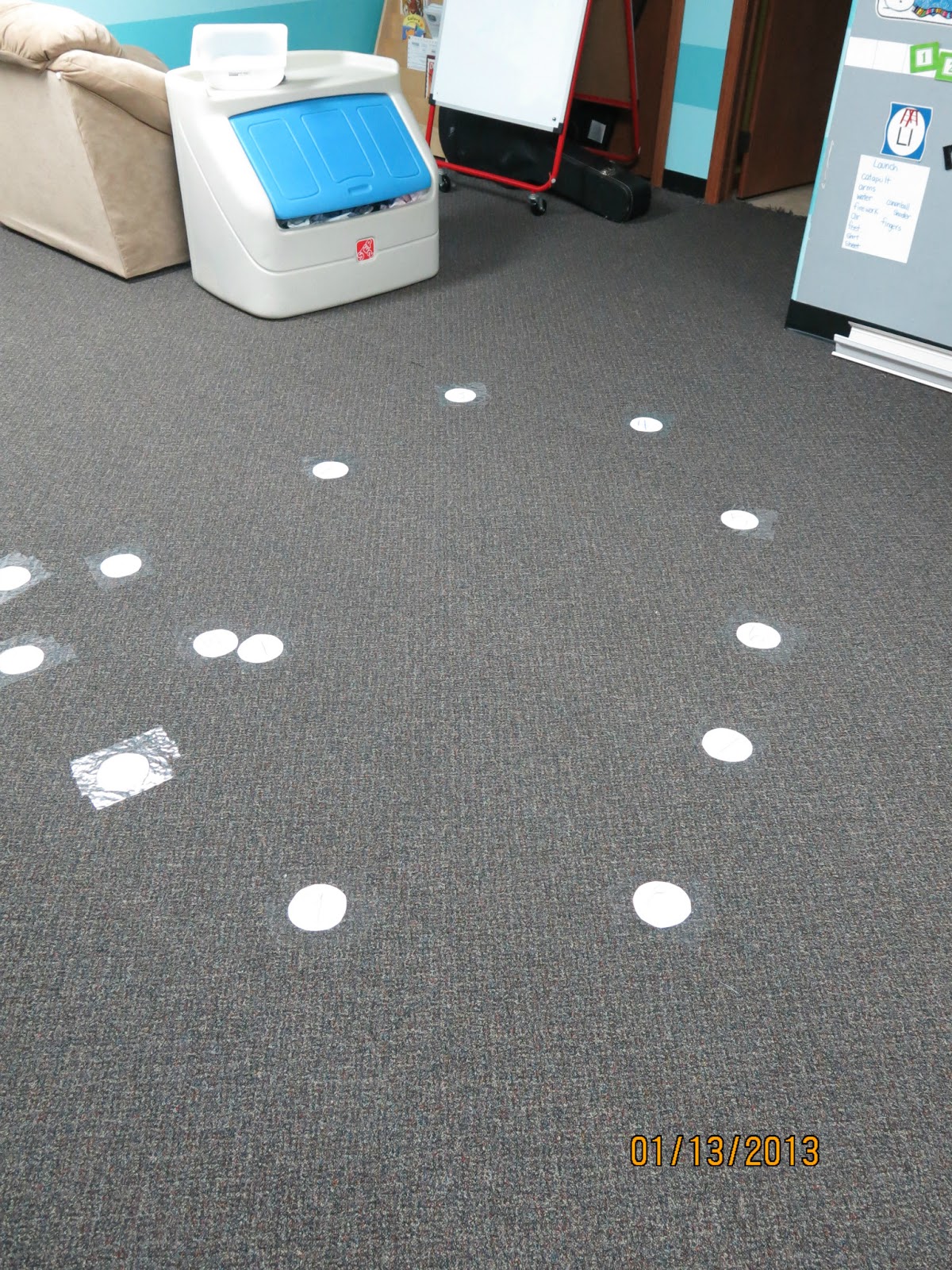 I found it interesting how each child felt the need to make sure that I knew someone had put numbers on the floor!  But other then that, not much more was said.   And so, I waited...patiently.....quietly.

About an hour into our morning, while the children were deep in their play someone, out of the blue said "Nita!  I KNOW!  It's one of those unicorn things that swim"

It took me a while to figure out that he was talking about what the dot-to-dot could be (I LOVE that about plopping a giant dot-to-dot.  The creativity and visual skills the children need to have to mentally connect the dots, then try to guess what it could be, uses some advance thinking skills!)

More guesses came at random times throughout the morning as the children were emerged in their play:
"I know...it's a submarine!"
"I think it's a monster hand."
"It could be a mitten!"

At last, the curiosity got the best of them.
"Can we connect the dots and find out what it is?!"

OF COURSE!!  I thought you'd NEVER ask!  (Keeping quiet and waiting for that moment is sometimes so challenging.  There was no sense in rushing them, there was plenty of learning occuring in their own play...but, I was getting anxious for them to discover what the dot-to-dot was!!)  Since the children have done numerous giant dot-to-dots at my house, they knew exactly how this was done.  If this is the first time you try this with your crew, I suggest holding out on the tools needed and let some creative brainstorming happen!  (see the link mentioned above for details about the first giant dot-to-dot with the kids in my program).

As the dots were being connected, impressive vocabulary was being shared "OH!  It's a curve", "OH!  I know...a seahorse is what I meant...it's a seahorse", "No...it's monster hands", "It can't be monster hands...there aren't any fingers",  "there's a thumb", "I think it's an animal with a really long neck" "That wouldn't be a very long neck though" ... on and on the chatter went and ideas being shared freely and safely!  I am so thankful that the environment I have created allows for fearlessly sharing new ideas and thoughts.

In due time......the dots were all connected!

We quickly sat down to enjoy the book, "The Mitten" by Jan Brett.

This story leads itself to many discussions.

WHY did grandma worry that Nicki would lose his WHITE mitten in the WHITE snow?
WHAT happens to the mitten when animals crawl inside?
WHAT else can stretch like a mitten?

By the time we were finished I realized that I had forgotten to buy some stretchy mittens like I had PLANNED on doing.  So instead of seeing how many toys we could fit into a mitten, we sat there a second when all of the sudden, it hit me......... a BALLOON!  We could see how many toys we can fit in a balloon!!

Of course the boys and girls thought that was an awesome idea, and they quickly went to work gathering toys they thought would fit.  We started with the smallest first (their idea, since that's how the book goes).

After each item was added (teamwork between myself and the children) I blew up the balloon.  The children were enthralled with the changes that happened.

The first time I blew up the balloon, and then let go of it, it flew across the room.  The second time, it dropped to the ground, then zoomed across the carpet.  By the third toy, it was no longer able to scoot at all, but it did a fair share of flopping. 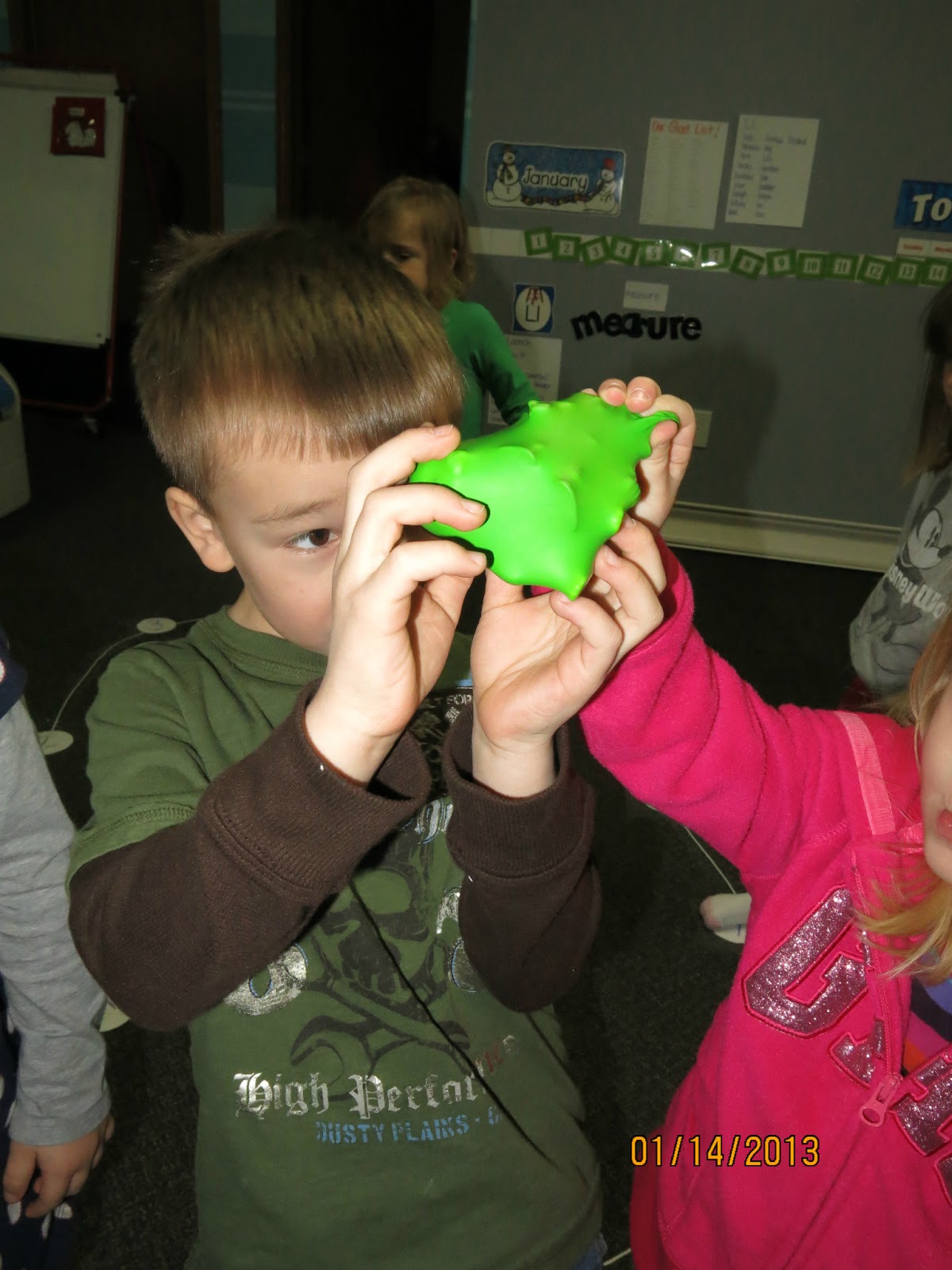 As the ballon became fuller and fuller, we had to choose more wisely.  We couldn't put toys inside that were sharp, for they would certainly put a hole in the balloon. 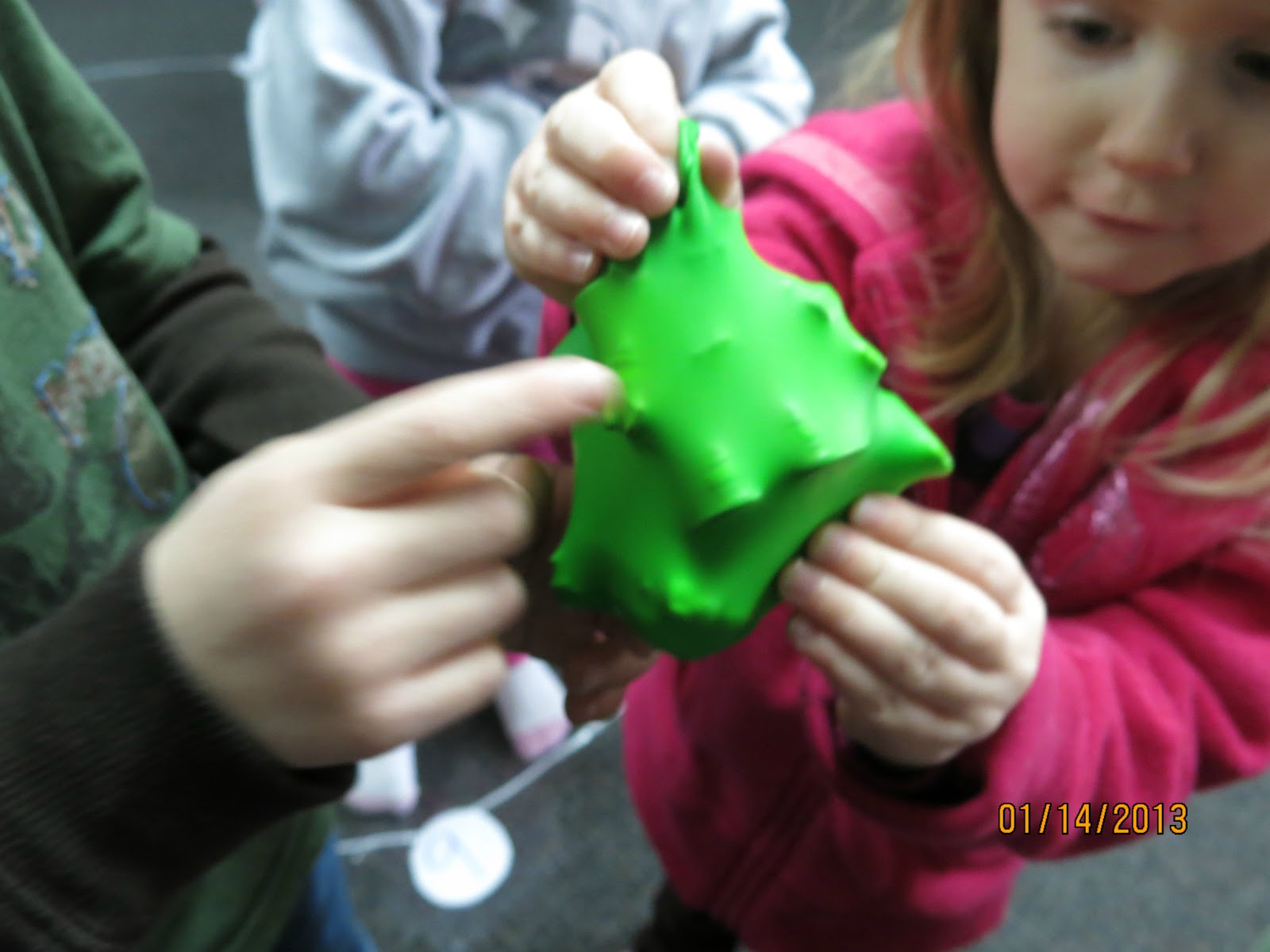 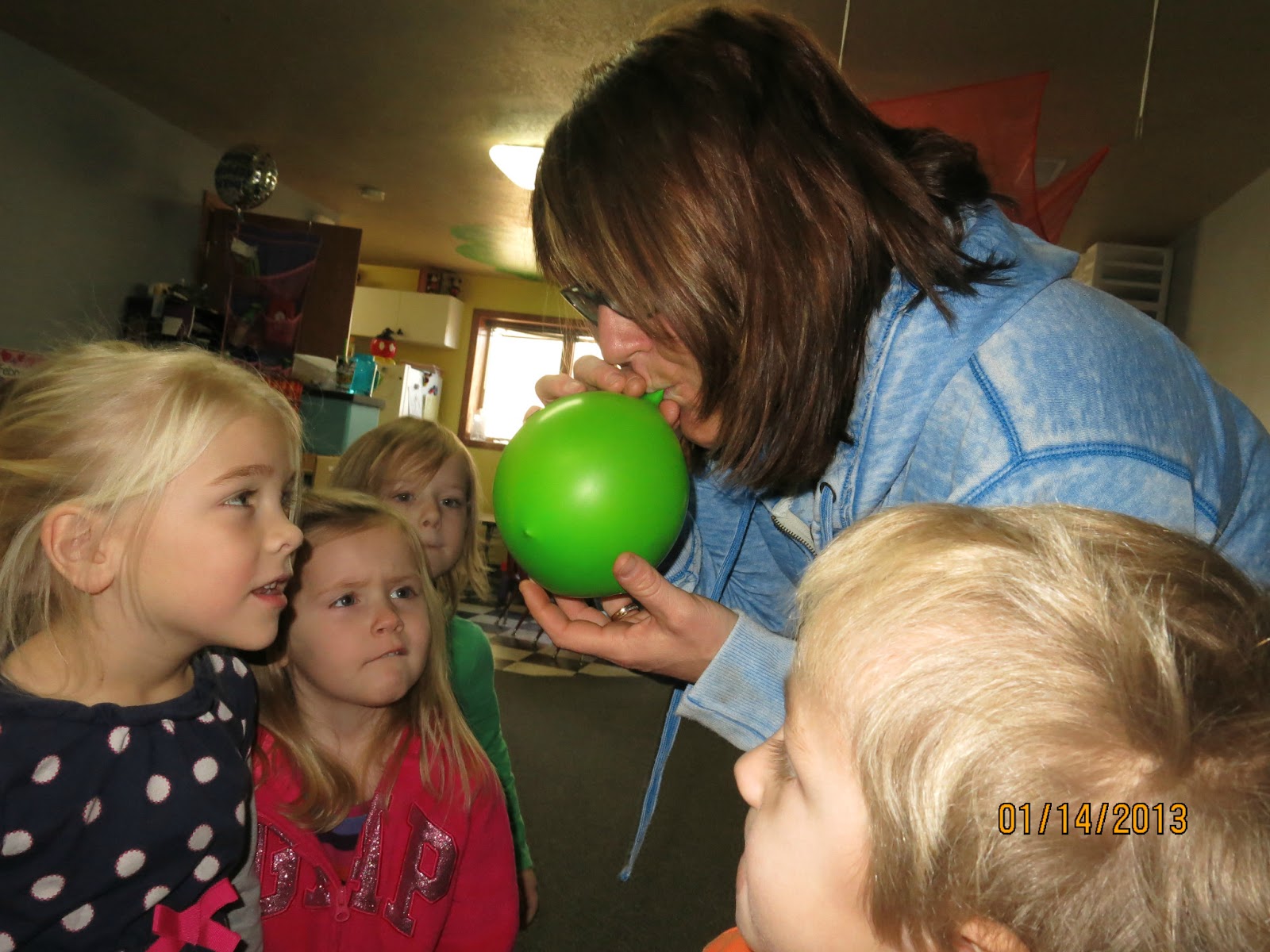 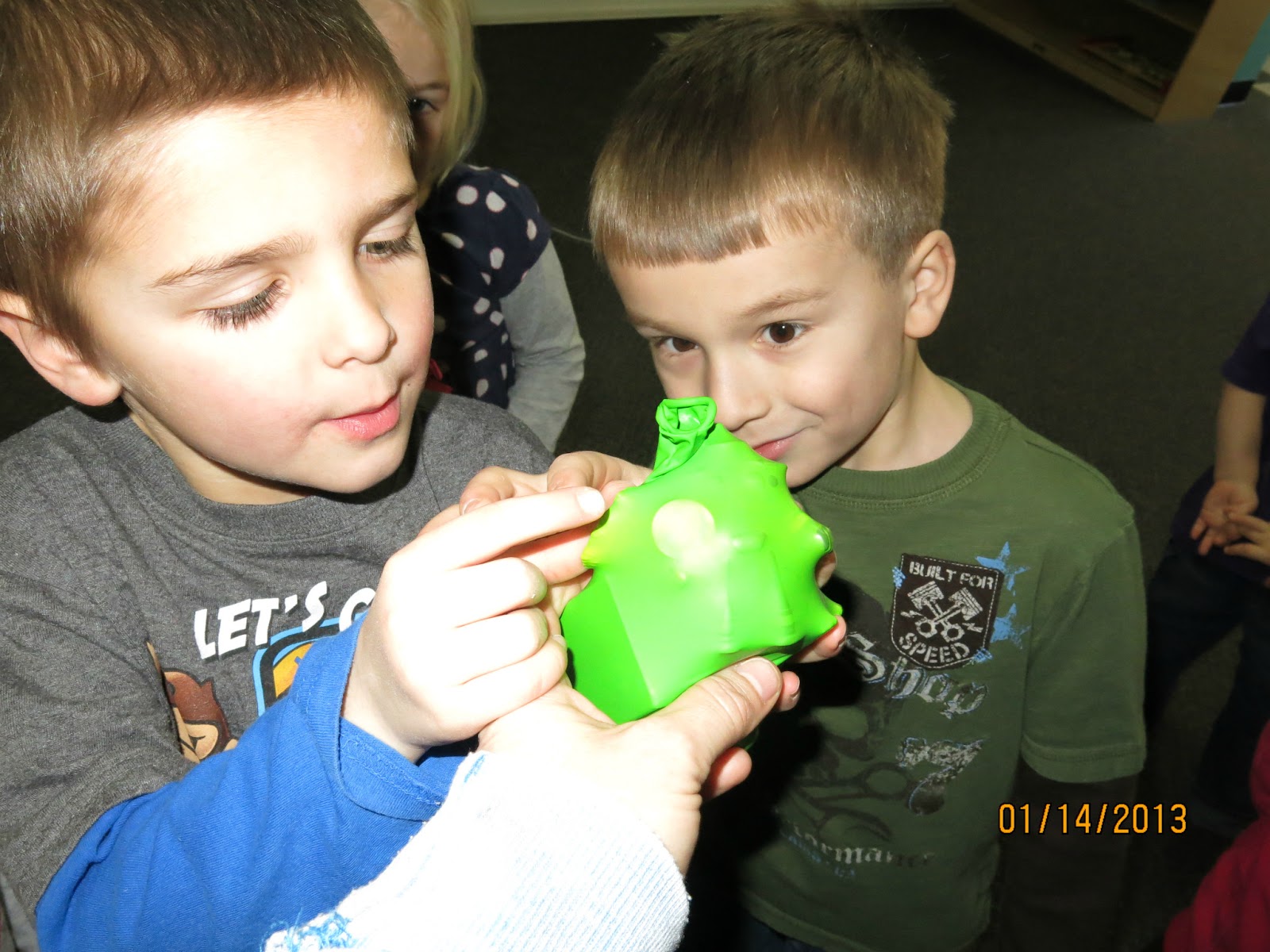 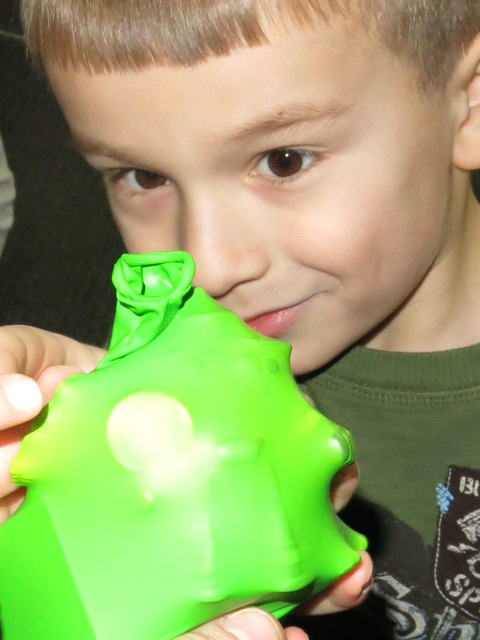 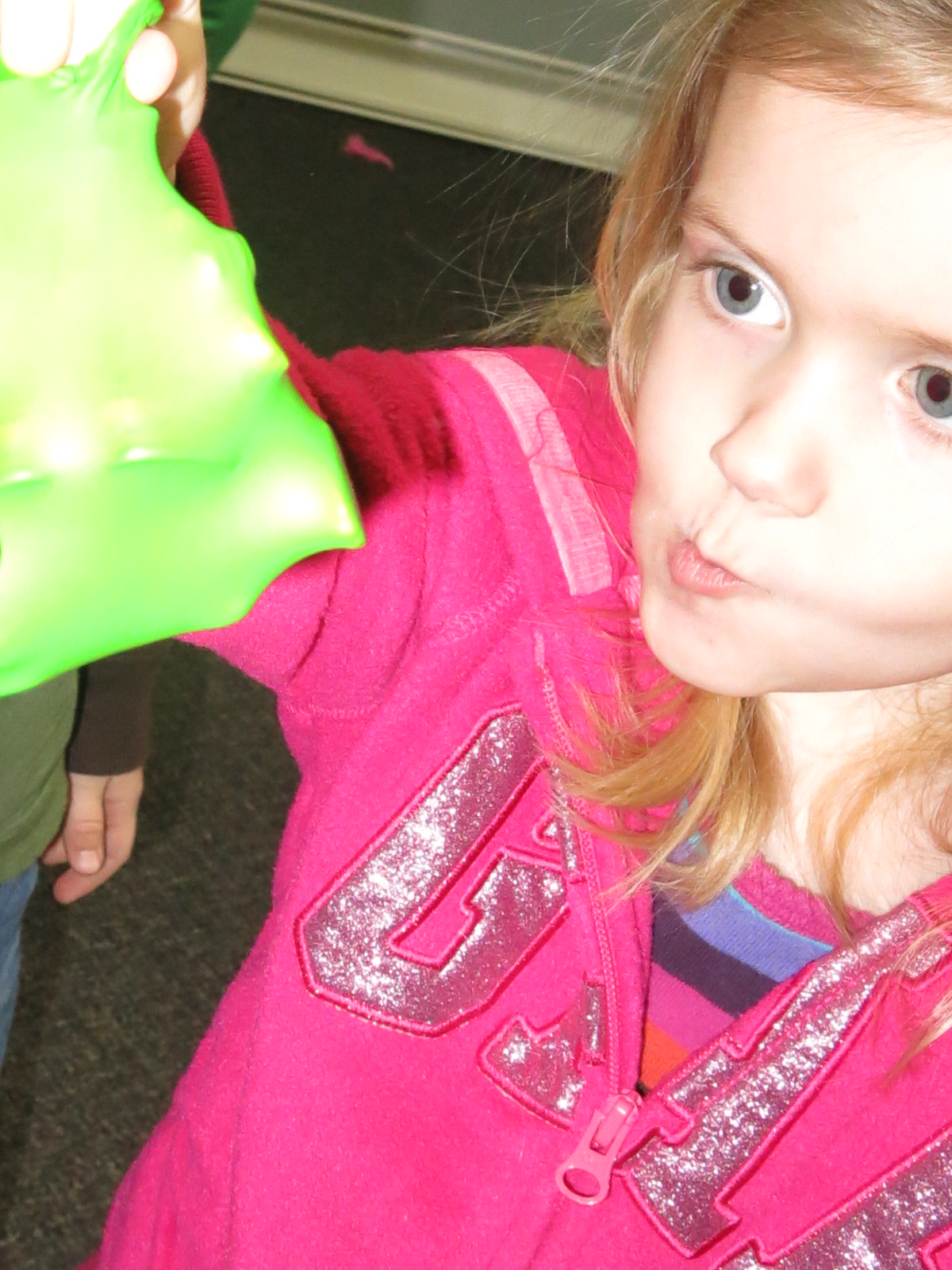 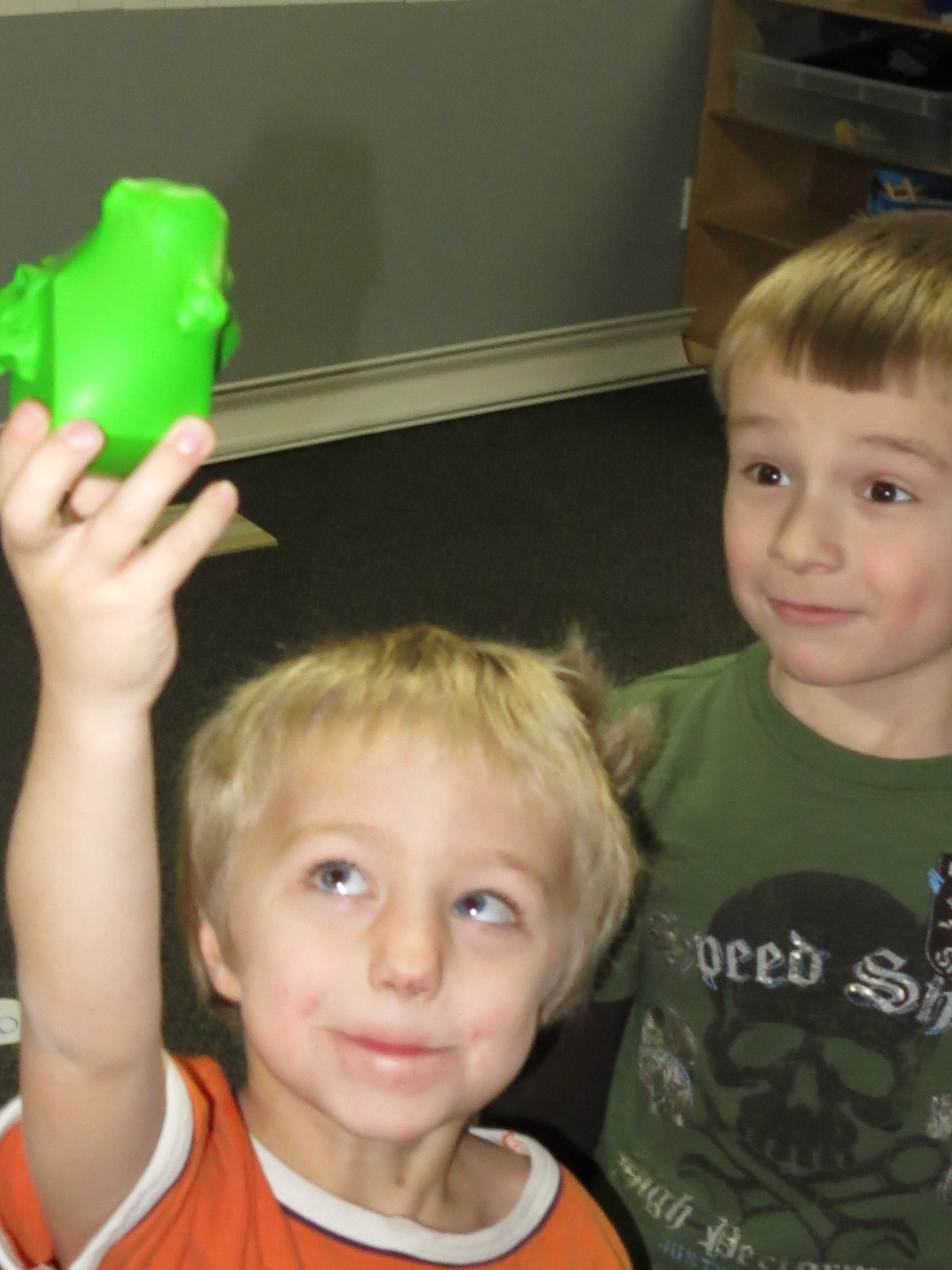 After the 6th item was added, we decided it was time to find out one more thing:  what will happen when we POP the balloon?!!!!  Since I was experiencing this for the first time as well, I was equally excited for the results!﻿
After a brief reminder that the only scary part about popping a balloon is the sound that it makes, and taking extra safety precautions just in case everything really flew far (hands over heads).  We counted to three and then.......POP!!!!

Undoubtedly, the two best parts of the story, "The Mitten" imagining all those animals squeezing themselves into a mitten...and then, the bear's great big sneeze that causes everyone to out of the mitten.  Well...the results of popping the balloon were similar!  All of the contents flew and scattered about.  It was a most grand moment!! 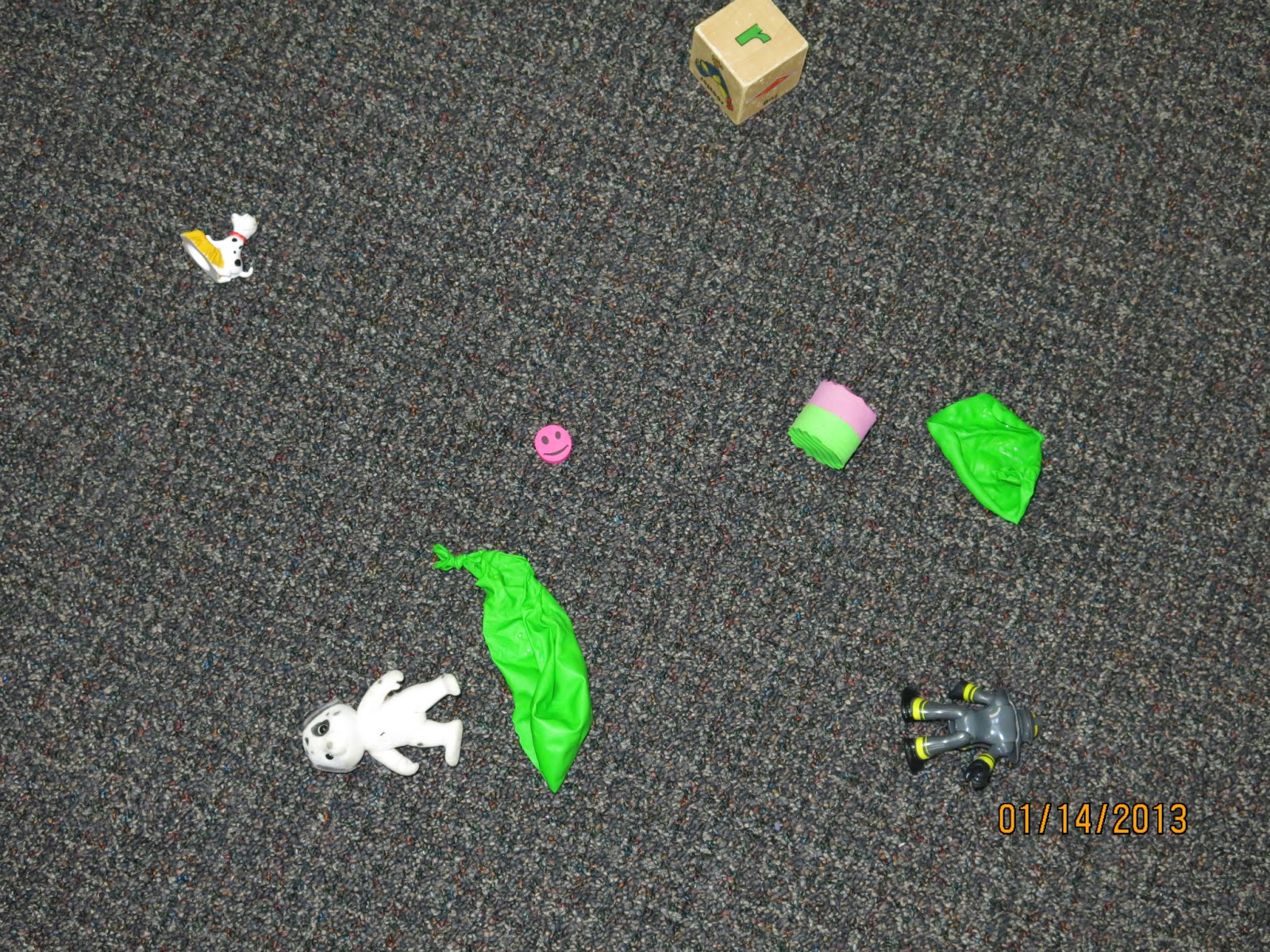 Got spontaneity?
When is the last time you let spontaneity happen, and the experience was as exciting for you as it was for the children in your program?

Sometimes we get so stuck in our plans, that we by-pass spontaneity in order to put a check mark beside a core standard.   Set down the checklist and your plans, and take advantage of the moment.  Be spontaneous!
Posted by Denita Dinger at 11:44 AM

﻿﻿It's winter here in sunny South Dakota.  We have nothing but TIME on our side, so choosing a quality plop, then giving children the TIME they need to launch their own learning is the key to winter survival!  Also...out of 100 children surveyed...100 said it is their preferred method of learning!! :)

(side note:  I did not actually survey any children...this would require paperwork, and time away from play...I am severely allergic to both)

I am a firm believer in giving children ownership of discovery.  This sometimes requires GREAT restraint on my part (trust me, my mouth prefers to be talking and my hands love to show)...but I have learned that the results of letting children own discoveries  are ALWAYS worth it!


After much debate, it was determined that the purpose of this strange contraption was to launch things.  Already the vocabulary benefits of plopping something unknown into a young child's environment were apparent.

After a quick look around the room, a ball was grabbed and the launching began! 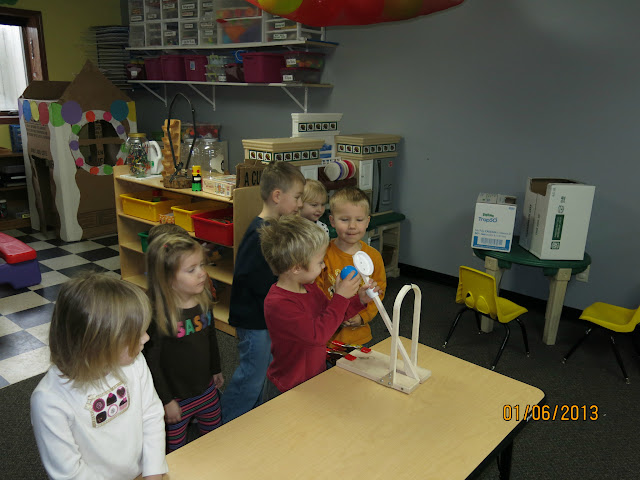 It didn't take long for us to realize that the balls seemed to fly a bit too easily, and a bit too far and hard.  So, we quickly did a search for softer items to launch.  We agreed that the "Stuff Approved for Launching" or S.A.F.L's would be fluffy pom poms (not the cheerleader type), foam blocks and three lucky stuffed mice (I am certain I saw a look of fear in these little bugger's eyes as I snagged them from their safe haven in the coveted "Nita's Closet" :) 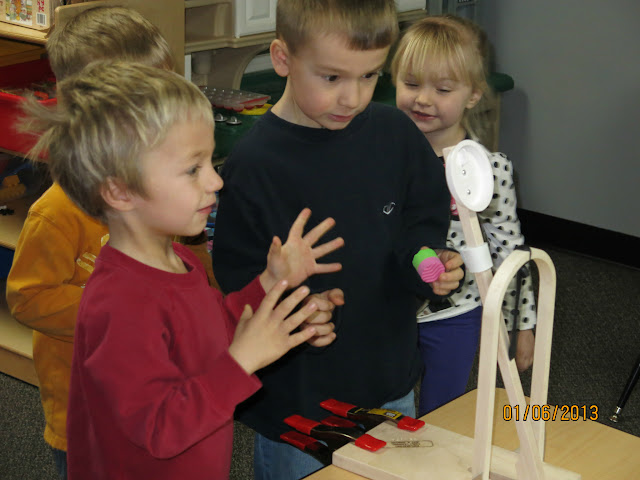 This fantastic morning was inhanced with a  MYSTERY WORD. The key requirement of a mystery word is that it be PERTINENT in the lives of the young children in your program. Today, right now....LAUNCH was a very pertinent word that had the potential for LOTS of meaningful, hands-on learning!

During all that child-led exploration of the catapult, the children were also finding the letters for the days' mystery word (recall:  "launch").  I am proud to say they figured out what the word was.  Did they sound it out?  Not totally.  What they did was gathered clues.  They knew the mystery word began with the letter "L" and enough of the children know the sound "L" makes.  They also knew we had been spending the morning launching stuff.  They put those clues together and were over the top excited to tell me that the mystery word was "LAUNCH!!!"

Brainstorming and "show and pride" began as we explored OTHER methods of launching.

We were launching the SAFL (stuff approved for launching) in DIFFERENT ways!

1.  We launched with our feet! 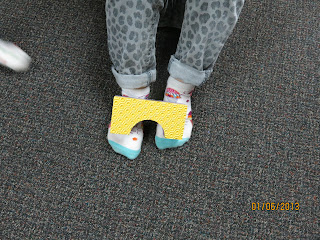 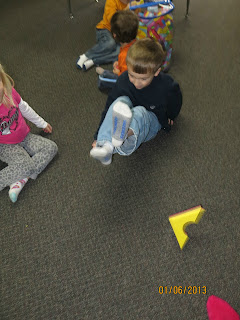 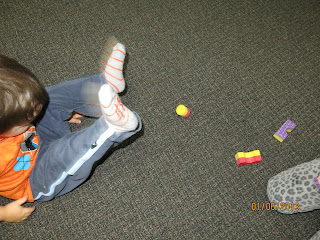 2.  We launched with our shirts! 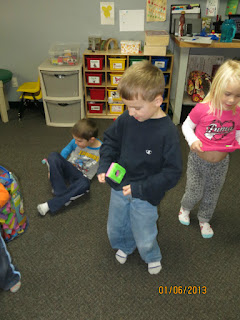 3.  We launched with a bedroom sheet! 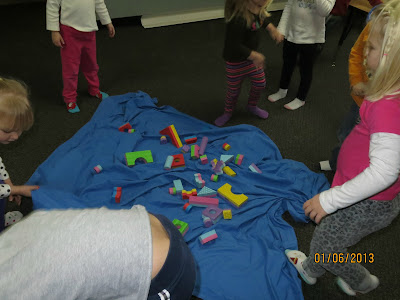 Give children TIME.  The content of this blog occured over a 3 hour period -- plenty of TIME was given for all sorts of learning to be launched!!

Do you think the children in your program would benefit from the addition of a catapult?  If so....you can purchase them from Jeff A. Johnson at Explorations Early Learning.  Jeff handcrafts each one especially to be used for lots and lots of play!  Here is the link:  I WANT A CATAPULT!! enter the code:  "Denita Sent Me" for a 15% discount!!

Give the children in your program time to launch their own learning!!  PLAY COUNTS!!!﻿